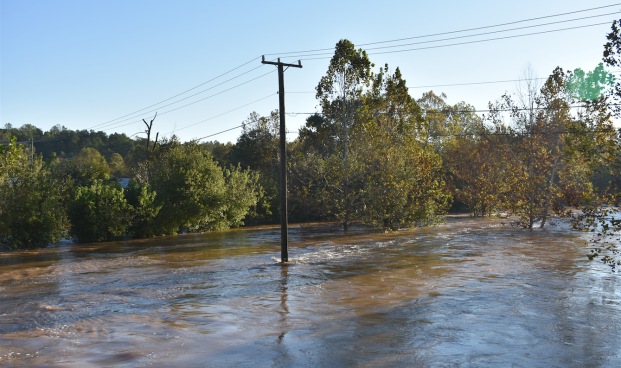 This photo was taken at the Appomattox River bridge Friday morning around 7:30 a.m. (Photo by Emily Hollingsworth)

River to crest at midnight, power outages could linger

The Appomattox River is expected to crest at 23 feet around midnight this evening and power could be out for some Farmville residents through the weekend and into Monday, Farmville Mayor David Whitus said as he relayed some of the effects that Tropical Storm Michael is having on the town.

He offered some background Friday morning on the changing status of the river.

“Last night they were telling us it was going to crest early tomorrow morning between 8 and 9 and at basically 24 feet, which would have put water over the bridge,” Whitus said, adding that Friday morning, the National Weather Service was “saying it’s going to crest at 23 feet and probably around midnight tonight, and we’re hoping that will not put water over the bridge.”

Whitus explained what this level could mean for the town.

“Obviously, Green Front is moving stuff off of their lower levels, and down in that area, we’ll see flooding,” he said. “Those low-lying areas down there around FACES, where FACES’ building is, in those areas we’ll see flooding. And on the other side, not sure what that may do to Poulston’s and Appomattox River (Company). I think they’re preparing.”

The mayor also wanted to make sure to get the word out about the town’s power outages, which he said could persist for two to three days according to Dominion Energy.

“There are just a number of poles that are down — there’s one on High Street, there’s one up here on West Third Street,” Whitus said. “Pole replacement just doesn’t occur quickly. They’ve got so many out, so we just really want people to be prepared — with their refrigerators and freezers and stuff like that — that it could be as late as Sunday or Monday before all power is restored.”

He noted that Farmville crews worked through the night Thursday evening into Friday morning to deal with the effects of Tropical Storm Michael.

“They’re out this morning, and they’ve done a fantastic job,” he said. “Everybody has done a fantastic job, from fire and EMS and Public Works and police — we have a great crew, and they assembled them really quickly because we did not expect this storm to be of this intensity. It sort of turned at the last minute.”

The impact on Farmville was in stark contrast to the impact Hurricane Florence ended up having in September.

“We were prepared for Florence,” Whitus said. “There was all kind of hype and no storm. And then last night, all of a sudden, there was a horrific storm. But the good thing is, at least here in town, there’s no injuries …”

Varsity high school football teams from the Heart of Virginia will be playing at unusual times again due to a... read more