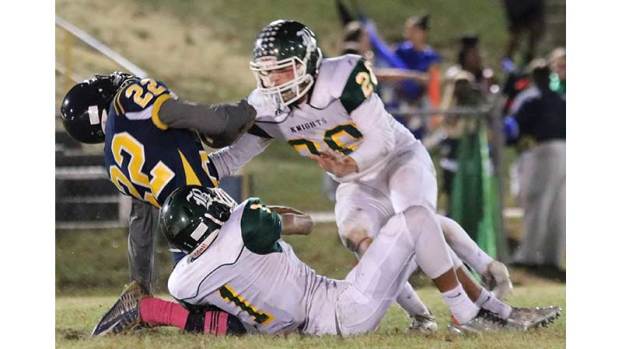 Buckingham County High School sophomore defensive back Xavier Copeland, No. 1, and junior linebacker Walter Edwards, No. 20, bring down a ball carrier for host Bluestone High School on Friday. Edwards and Copeland were difference-makers on both sides of the ball, fueling the Knights’ 28-7 victory. (Photo by Lyla Wood)

“I think we played a good game — both sides of the ball,” Buckingham Head Coach Seth Wilkerson said. “Going to the game, I knew we were prepared.”

He noted that on about the third play of the game, Knights junior running back Walter Edward broke away for an approximately 70-yard touchdown run.

“I think on offense, we were able to move the ball and keep it a little while,” Wilkerson said, adding that the offensive line is coming together, with the linemen demonstrating improved understandings of their roles. “I think they played a good game up front.”

Taylor has become a familiar presence at quarterback for Buckingham with sophomore Gerry Toney having been sidelined by injury for most of the season.

Longtime fans are also now seeing a Knights defense that they know well.

“I think the defense is getting back to where it used to be …” Wilkerson said, referring to the many playoff years the Knights enjoyed under Head Coach Craig Gill when Wilkerson served solely as the team’s defensive coordinator.

Buckingham avoided any major injuries, putting itself in the best position possible entering The Battle of Route 60, which it hosted Tuesday, a compressed schedule made necessary by the recent impact of Tropical Storm Michael.

“We’ve got to just make that turnaround quick and get ready for Cumberland,” Wilkerson said Monday.