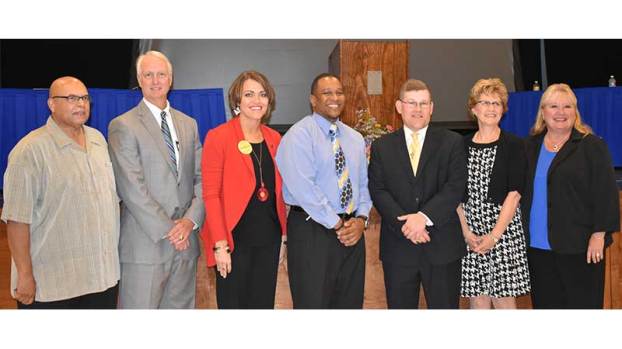 Candidates for the circuit court clerk position in Cumberland County shared their backgrounds, relevant skill sets and desires to serve the community during a forum held Tuesday at the Cumberland County Middle/High School cafetorium.

The forum was organized by the Cumberland Republican and Cumberland Democratic committees, led by Diana Shores and Catherine Fleischman.

The circuit court clerk, according to the event handout, is elected to an eight-year term and handles administrative matters for the court, including managing court dockets, processing criminal files, preparing, recording and maintaining court orders, acting as the general record keeper for the county and responsible for probating wills, granting administration of estates and recording deeds and other documents related to real estate.

Michael Scales and State Sen. Mark Peake moderated the forum. Audience members submitted questions prior to the event that included how clerk candidates would probate, or validate a will; how they would handle a request from a citizen to research a potential lien on a property and what makes each candidate uniquely qualified for the job.

Fleischman said she was thrilled when Shores approached her to request that both committees organize the forum.

“Democracy is participation,” Fleischman said, “and I’m so grateful to the candidates here who are running for this office.”

Shores encouraged the audience to speak to the candidates after the forum.

“This is a job interview,” Shores said to members of the audience, “and you are the citizens doing the hiring.”

Carden, who spoke first, talked about her leadership experience in Fuqua School as the middle/upper school dean, working with more than 20 faculty and more than 200 students. She said one goal she has for the circuit court office is to make sure that she and deputy clerks in the office receive the necessary state training to become master circuit court clerks or master deputy circuit court clerks.

“The Code of Virginia outlines over 800 duties the clerk and her deputies are called upon to complete,” Carden said, who said she has been studying those duties with input from former and current clerks. “I can tell you that this is a demanding job, but I have the skills to perform it.”

Davenport spoke about his background in the U.S. Army, serving as a Non-Commissioned Officer in charge of the administrative section of one of the unions he worked for, a record-keeping and managing position. Davenport has been a deputy with the Cumberland County Sheriff’s Office and is a licensed real estate agent in Virginia.

“My goals and plans for the office are to take the office to the next level,” Davenport said, adding he will seek to update technology within the office. “I will be looking for new advances in technology and other resources to reconnect the disconnected population of our community.”

He said his goal is to take the mystery out of the circuit court position, to make the office accessible to citizens, particularly to youth, offering to create internship opportunities for Cumberland students within the office.

Dowdy spoke about his public participation and advocacy in the public school system, particularly his role in the Cumberland County School Board as a member. He said his commitment to public service would continue to the circuit court clerk position.

“Everywhere you go, you are selling Cumberland, to all of those that you meet in life,” Dowdy said. “I’ve been a part of the Cumberland County community for a very long time. I want to continue to give back to the community.”

Martin, who was sworn in as clerk of the court in May, said she is the only candidate with experience working in the circuit court office, working in the office for seven and a half years. She said she was hired by retired clerk Carol Ownby and worked as deputy clerk with Ownby and Spry, describing the experience as being trained by the best.

“Our office holds the history of Cumberland County,” Martin said, who added the county was formed in 1749. “The clerk’s office has always been the shining star in the courthouse, and I intend to carry on that legacy.”

Martin said she would work to allow the office to accept credit card payments and implement the supreme court criminal system, allowing the office to scan files that can be viewed electronically by judges, commonwealth’s attorneys and other attorneys, which those other attorneys could pay for. Martin said the clerk’s office could use those funds to be put in a fund to support the office’s technology among other items, potentially preventing the county from having to pay for those expenses.

Owens spoke about her more than 20 years of experience in the Cumberland area with the Virginia Farm Bureau Insurance agency. Owens said she has also had previous experience working with the area court system, including the circuit and general district courts.

She said her role as someone who is engaged and knows people in the community, and her experience working with court records, could play an integral role in the circuit court office as clerk. Owens said the insurance agency underwent a similar process to allow for electronic payment and would intend to bring the same process to the clerk’s office.

“I have earned the trust of you and your family as I have taken the time to get to know you and your personal situations,” Owens said. “I have been able to use my experience to help you to make the decisions for your families … This community is my home … and I would like to continue to serve each of you in this community by being your next clerk of circuit court.”

When asked how candidates would probate a will, Owens said she would file the will with the court, assess any debts or liens for property or other items that may have been in the will, and correspond with the executor of the will to make sure the processes are carried out.

Carden, recently working as an executor of a will, said the clerk verified the will and verified Carden as the executor of the estate.

Davenport said he would follow all protocol given by the Code of Virginia. Dowdy said he would verify the will’s legitimacy and execute the processes listed in the will.

Martin said the office would probate the will depending on what type of will it is. Martin said the clerk’s office would assess the state value of any property, bank accounts without survivorship and real estate, input those items into a probate system and refer the findings to the commissioner of accounts.

When asked how candidates would help a constituent research property liens or judgments recorded against their properties, Martin said it is technically illegal for the court clerk’s office to research what is considered a title search for a constituent, but said she could show the constituent how to use the system to locate those items on their own.

Carden and Owens said the clerk is given extensive on the job training to learn all aspects of the office.

The opportunity for Cumberland residents to vote for a circuit court clerk candidate is Election Day, Nov. 6.

Fire departments in Buckingham County went head-to-head in various competitions during a celebration and daylong event honoring the life and... read more