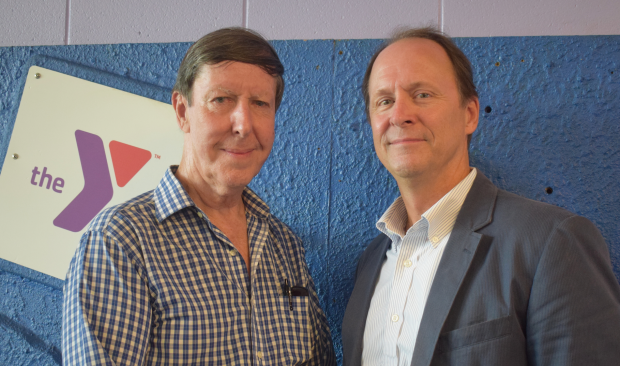 FACES Director Ellery Sedgwick and Southside YMCA Development Chair Brad Watson look forward to being next-door neighbors. A recent collaboration resulted in a permanent home for the local food pantry next door to the Y.

Virginia Family YMCA recently announced, in a press release, they will soon have a new neighbor.

“The Y couldn’t be more pleased that Farmville Area Community Emergency Services (FACES) is building its new facility next door,” the release cited.

FACES Director Ellery Sedgwick said, “It’s the biggest thing that has happened to us since our founding in the 1980s.”

During the past four decades, FACES had operated in several locations, the last two provided free of charge by the Town of Farmville.

“I would like to express our appreciation to Gerry Spates and the Town Council,” Sedgwick said. “They have always been good to us.”

At FACES’ most recent location on South Street, water destroyed food supplies and equipment when the river flooded earlier this year.

According to the release the Southside YMCA recognized the local food bank’s dilemma and decided to be a good neighbor.

“FACES had a need, and the Y had 2.5 acres of land it would probably never need,” YMCA Development Chair Brad Watson said. “Our mission has changed over the years, but originally the YMCA temporarily housed people who had nowhere to stay. We thought that helping to feed local people who didn’t have enough to eat was a worthy goal.”

FACES and the Y agreed to “a generous arrangement.”

“The Y gifted some of its land to FACES, and FACES assisted the Y by helping to raise some funds for its capital campaign,” Sedgwick noted.

The release further cited, “FACES hopes to break ground for the new 7,000-square-foot facility in September. Most of the cost of construction and equipment will be covered by a $500,000 grant from FeedMore (formerly Central Virginia Food Bank).”

“We expect the total to come in near $740K, Sedgwick added. “FACES is contributing the remainder with funds raised thru a bequest, grants and local fundraising.”

A conservative estimate for completion is March 2019.

The new facility will be twice the size of the current location on South Street and will include offices and a larger freezer and refrigeration capacity that will augment an emphasis on healthy foods. There will also be a meeting space to assist in developing programs like USDA, Senior Commodities and Backpacks currently on FACES’ schedule.

Every year FACES distributes well over a million pounds of food to around 1,000 low-income households, making it one of the four largest food pantries among 300-plus in Central Virginia.

Potential partnerships with the Y and local schools are already in the planning stages.

“The Y and FACES look forward to continued collaboration in support of the community,” Sedgwick said.

“We desperately need more organizations to come together and pool their resources toward common goals,” he said. “It’s a simple matter of economics.”

The release stated, “Southside YMCA Branch Director Stephen Blewett is also excited about having FACES as a next-door neighbor.”

“I believe having FACES next door will have a positive impact in the area,” he said.

The Y and FACES have already engaged with the Piedmont Health District, Agricultural Extension Services, and Longwood’s School of Nursing to pilot a comprehensive health maintenance program for low-income families.

“We are so pleased to be able to help others in need, and our mission is to continue doing so in the time ahead,” Watson concluded. “We need more of this collaboration in our community.”

In closing the release cited, “Collaboration, as Watson and Sedgwick will tell you, is as simple as being a good neighbor.”