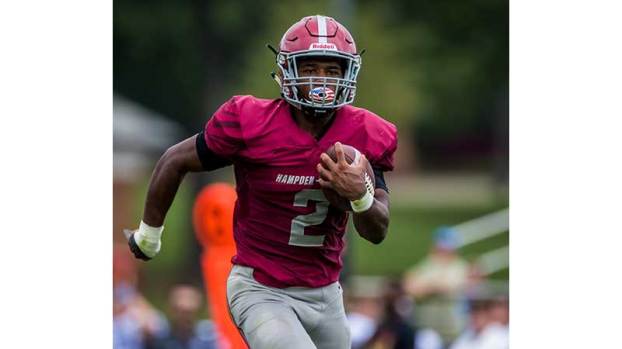 Tigers look to rebound from 0-2 start

Hampden-Sydney College (H-SC) Football Head Coach Marty Favret said that he would know a lot more about his football team after its Sept. 8 home opener against Christopher Newport University (CNU).

The Tigers fell 17-13 to the Captains in a nail-biter.

“I really thought we lost a game we should have won, and we clearly improved from week one against a good CNU team, just needed one more play,” Favret said. “It’s kind of (a) loser’s lament, but I thought if we’d played that game five times, we’d win it three or four, but we came up short. A couple calls went against us.”

H-SC opened the season on the road Sept. 2, losing 33-14 to Averett University. The coach broke down how his team built on that performance in its play against the Captains.

“(We) improved a lot defensively,” he said, as the Tigers allowed 346 offensive yards against CNU compared to 471 against the Cougars. “Offensively, I’d buy stock in our offense right now. We’re probably selling pretty low only averaging 13 points a game, but we’ve got a great quarterback, and I see better things ahead. We just have to correct some mistakes, and we faced two really good defenses in the first two weeks.”

Hampden-Sydney senior quarterback Alec Cobb was 33-for-53 passing for 330 yards, one touchdown and two interceptions against Averett, and he was 31-for-47 for 399 yards, one score and one interception against CNU.

Cobb was among the pair of players Favret highlighted for their performances against the Captains.

Asked if he sees his team’s offense as largely set to do really well this year, Favret said, “It’s a tough league, but yeah, I think we’re a lot better than we were last year, and we’ll see how it plays out, but we’re 0-2 right now, and so that’s not something we’re used to, and we’ve got to kind of get over that and find a way to get a win and then go from there.”

Due to Hurricane Florence, the Tigers’ home game this past Saturday against the University of New England was canceled. As of this writing, they are set to return to action Saturday, Sept. 29, at 1 p.m. against visiting Emory & Henry College.

It took one of the top teams in the country to end the four-game win streak of Longwood University’s field... read more