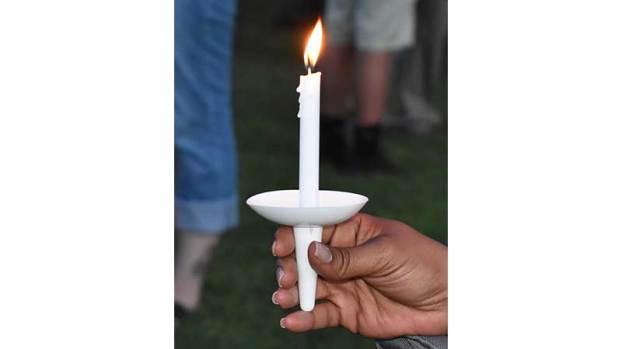 A participant holds a candle to remember Madeline Gearheart Mitchell, the woman who inspired the nonprofit Madeline’s House. (Photo by Emily Hollingsworth)

People from around the community gathered for a vigil Thursday, Sept. 6, to remember Madeline Gearheart Mitchell, of Farmville, described as a warm, effervescent, kind and brave person and a fiercely protective mother of two. She was murdered 20 years ago on Sept. 6, 1998, by her estranged husband.

During the vigil, held at Wilck’s Lake Park, participants watched a presentation, received resources about domestic violence and organizations that can help, and spent time contemplating and connecting with others who had similar experiences.

Megan Clark, commonwealth’s attorney for Prince Edward County, said she knew about Madeline’s story and the question she has is “what if?”

What if she and her family were able to receive help at a shelter? What if Madeline and the abuser had never met?

She encouraged people in the region to break the silence about domestic violence.

“I challenge everyone to share Madeline’s story,” Clark said.

Clark said common responses from people about abusive relationships, even from law enforcement and people in the justice system, such as “why doesn’t she leave?” and “I would never let that happen to me” can be damaging, citing the importance of understanding the psychological effects that abusers can have on their families and significant others, describing them as “master manipulators.”

She said victims sometimes do not want to testify in court because they have to face their abusers when they get back home.

Clark, who previously worked in Henrico with victims of domestic violence, said that supporting victims means to continue to persist, advocate, listen to victims and share difficult truths even when the situation does not appear to change, saying that people “have no idea what they’re going through.”

To victims of abuse, Clark said, “You are worthy. You are wonderfully and beautifully made.”

“We are here for you,” Clark said.

Madeline Gearheart Mitchell escaped from her abusive spouse with her two children in July 1998.

Madeline, at the hands of her abuser, experienced profound physical, psychological and mental abuse by her spouse, Barry.

Documentation from Madeline’s House about Madeline cited that she and her daughter spent the night with a friend following her escape.

“The next day, as Madeline was leaving work, her estranged husband appeared. He attempted to pull Madeline from her vehicle, telling her that he loved her and wanted her and the girls to come back home to him,” documentation cited.

“Madeline’s co-workers witnessed this incident and immediately called the police. He was arrested; charged with assault and battery and attempting to elude police officers. The court issued a protective order against Madeline’s estranged husband. The next day bond was set and he was released. That day in court, Madeline stated to the Victim Witness Director that she knew he would kill her,” the release cited.

Madeline, in desperation, contacted domestic violence shelters across the state.

Madeline decided to stay with a friend several counties away.

Madeline continued to work and arrived at her job days later to find her estranged husband on the roof of her building. Co-workers called the police. He was arrested again and brought back to court for violation of the protective order. He was released on the original bond. Several days later, while waiting at a stoplight, he ran toward Madeline’s car and shouted at her to come home. He was arrested a third time and brought back to court. He was incarcerated this time on a more substantial bond.

Madeline moved back to the Farmville area following his incarceration for her and her children to be closer to her family and for the girls to attend school.

Farmville Police were called each day to escort her as she left work, to prevent more incidents from occurring. Longwood Campus Police also checked on Madeline and the girls on a regular basis.

On the day of court, Madeline arrived at the courthouse to find her estranged husband standing in the hall, waiting for her. It was then she learned that he had been bonded the previous day. Madeline was not notified of his release. Following court, she and the Victim Witness Director spoke daily, trying to help ensure their safety.

On Sept. 6, 1998, her estranged husband went to Madeline’s apartment, broke in through a window, and ordered his two young daughters outside. He shot and killed Madeline and then himself.

As family members, loved ones and the community reeled from Madeline’s death, they started to build an organization that would have helped Madeline when she needed it.

The goal of Madeline’s House, founded a year after Madeline’s death and which provides shelter, food transport to appointments, resources for jobs and housing support, counseling and accompaniment to medical exams in the event of sexual assault, is to make sure no families or victims in the region experience the same tragedy Madeline had.

A friend of Madeline’s and survivor of domestic violence herself read a poem about a victim receiving flowers from her abuser as his abuse of her escalated, until she received flowers for the last time at her funeral.

She described Madeline as someone who everyone loved, and could not help but love.

She said Madeline liked Barbie dolls, Marilyn Monroe and was happy all of the time, though said Madeline wouldn’t hesitate to let people know when something made her mad.

Alyce Loeser read a poem she wrote about Madeline, saying she did not know Madeline personally but admired her courage and fierce protection of her children.

As the sun set, participants lit candles as soft music played. People either sat by themselves to contemplate or connected with loved ones and people they did not know who had similar experiences.

Historically Black Colleges and Universities (HBCUs) still matter. This is the message and goal of the Farmville Kappa Rho Omega... read more