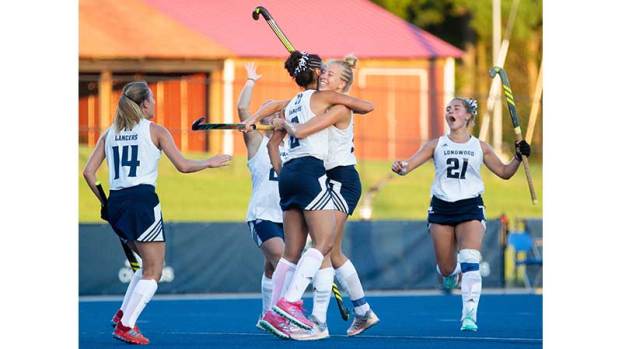 Pictured from a previous match, from left, Longwood University field hockey players Sophia Loscher, No. 14, Luna Lopez, No. 2 embracing Leonie Verstraete, and Clara Meschini, No. 21, had plenty of reason to celebrate Tuesday morning after the Lancers' first win over a top-25 team in the program's 14-year Division I era. (Photo by Mike Kropf / Longwood Athletics)

They’ve done it rain, shine and now even in the face of an approaching hurricane.

Longwood University’s field hockey team raised the bar for itself once again and made history in the process, upsetting 20th-ranked and the NCAA’s top scoring team Liberty University 2-1 Tuesday morning for the program’s first win over a top-25 team in its 14-year Division I era.

The milestone win came in comeback fashion thanks to a pair of second-half goals from freshman Luna Lopez and sophomore Charlotte Wilm, who helped the Lancers (4-1) overcome a 1-0 deficit in a game that was moved to a rare morning start time due to the threat of inclement weather heading to the region as a result of Hurricane Florence.

With less than 24 hours to adjust to the new start time, Longwood answered the early bell and dealt the 20th-ranked Flames (3-2) only their second loss of the season. The Lancers joined No. 3 Duke University as the only teams to defeat Liberty this season, dousing a red-hot opening run to 2018 that has seen the Flames burn No. 17 James Madison University, reigning Mid-American Conference (MAC) runner-up Kent State University and Longwood’s fellow MAC member Ohio University — all on the road.

“This is a huge moment for our program and one that we couldn’t have reached without the contributions of all the players who came before this year’s team,” said Iain Byers, who, now in his eighth year as Longwood’s head coach, is just four wins shy of reaching 100 for his career. “It’s very exciting for the team and the program to get a win against such a strong team. We played some of our best hockey and again relied on our defensive structure and tenacity to keep them at bay.”

Now the Lancers will enter the start of MAC play buoyed by a three-game win streak and a 2018 resume that features a 2-0 loss at the hands of No. 7 University of Virginia as the only blemish. Longwood’s road to the program’s first MAC Championship will start Saturday, Sept. 15, at Central Michigan University at 11 a.m.