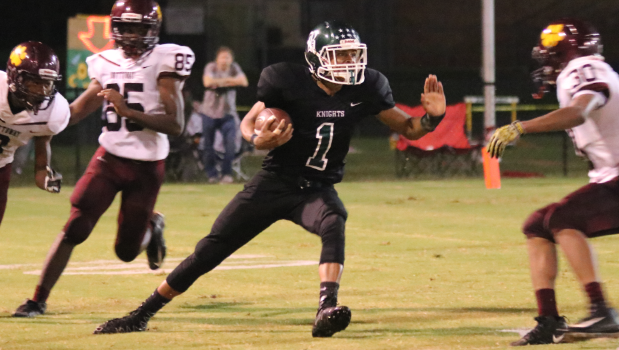 Buckingham County High School sophomore running back Xavier Copeland, No. 1, prepares to hold off a Nottoway High School defender as a couple more give chase Friday during the Knights’ 19-3 homecoming game victory over the visiting Cougars. (Photo by Lyla Wood)

Buckingham County High School’s varsity football team reminded fans Friday night of the Knights of old who made the playoffs every year from 2009-15.

In front of a packed crowd for their homecoming game, the Knights used their run game and strong defense to keep Nottoway High School at bay, never trailing on their way to a 19-3 victory.

He noted they cut down on the mental mistakes with which they have been plagued in recent weeks.

The Knights did not throw the ball much, making an effective run game their definitive offensive identity.

Buckingham junior quarterback Walter Edwards scored on an approximately 30- to 35-yard touchdown run in the second quarter to help the Knights take a 6-0 lead, and they led 6-3 at halftime.

“Nottoway’s defense was playing well,” Wilkerson said. “We made a couple of adjustments, but we were able to break a couple in the second half — get it going.”

In the third quarter, Edwards scored again, this time on an approximately 40- to 45-yard run that made the score 12-3.

The Knights’ final points of the night came when sophomore quarterback Cameron Taylor scored on a run from about a foot away from the goal line.

“We had three backs that ran the ball well,” Wilkerson said.

Edwards finished with 14 carries for 130 yards and two touchdowns. Freshman running back Dalante Woodson ended up with 56 yards on 12 carries, and sophomore running back Xavier Copeland had six carries for 45 yards.

“We were able to get more people involved so they can’t just focus on Walter,” Wilkerson said.

On defense, Edwards, also a linebacker, led Buckingham with 11 tackles. Senior linebacker Quantarius “Q.T.” Stanton had seven tackles, as did Copeland, also a defensive back.

Junior defensive back Nathan Brickhill made a key stop on 4-and-1 in the second half that kept Nottoway from scoring, the coach said.

Wilkerson was part of the Knights coaching staff as a coordinator during their highly successful playoff years, and he described what might have given fans déjà vu Friday night.

“I think we played well on defense and were able to control the clock on offense — a lot of stuff like we used to do back years ago,” Wilkerson said.

Buckingham (2-3) is set to visit Goochland High School on Friday at 7 p.m.