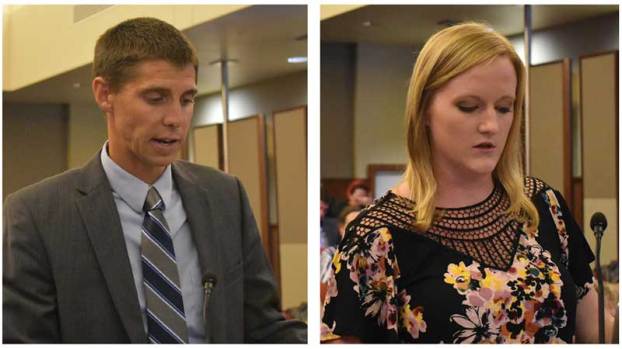 One tower, from applicant Shenandoah Mobile LLC, “Shentel,” is proposed to be a 195-foot monopole tower with a 4-foot lightning rod on approximately 55 acres on River Ridge Road, Route 763 in the Slate River Magisterial District. The property is currently zoned Agricultural 1 (A-1). The applicant is requesting a special use permit with conditions.

E.E. and Vickie Talbott are listed as owners of the property.

Representative Ryan Fletcher gave a presentation during the meeting Monday.

The special use permit has 15 conditions that include making sure the tower complies with Federal Aviation Association (FAA) standards in addition to other federal and state regulations, that if the tower has a backup generator, that the noise level would not exceed 65 decibels, and that the tower would be completed within two years of the date of approval.

No one spoke during the public hearing for the Shentel tower.

Board members voted to recommend the tower to the board.

The second telecommunications tower was from cellular company U.S. Cellular for a 195-foot monopole telecommunications tower with a 4-foot lightning road. The proposed tower would be located on approximately 5 acres on Seven Eleven Road, Route 711, in the Curdsville Magisterial District. The property is currently zoned A-1. The applicant is requesting a special use permit with conditions.

Florence Lango is listed as the property owner.

Switzer said the tower would currently offer 4G, but that the company is working toward offering 5G.

District Five Commissioner Sammy Smith asked Switzer if there had been specific cell carriers that have signed up to use the tower.

Switzer said the company approached surrounding carriers such as AT&T and Verizon about having a tower there, but no companies currently have plans to have a tower at that location.

Commission members also asked about the space the tower would be located, noting that 5 acres seemed like a small parcel.

Zoning and Planning Administrator Rebecca Cobb said she could not recall the acreage for towers the county have considered before.

“Typically the question has been if it meets setback requirements, if it’s going to meet collapsing requirements,” Cobb said.

Switzer confirmed that the 5 acres was on a high elevation. She said due to the shape of the parcel, it was difficult to set back, and she said the company wanted to keep it far from nearby residential properties.

One person spoke during the hearing. Deborah Devore, who lives on Seven Eleven Road, expressed concern about the location of the tower, as she lives in close proximity to the Lango residence and the tower would face the road by her home.

“I did not move to Buckingham County to walk out my door to see a cell tower,” Devore said. “If it was back, I would have no problem with this.”

District Three Supervisor Patrick Bowe said according to the site plat, the tower is already at the setback and could not go back further.

Members of the board voted to recommend the tower to the board.

CityScape, a consulting group that has worked with the county on telecommunications tower proposals in the past, evaluated the two projects and determined that the project complies with local and federal guidelines.

The Town of Farmville’s Industrial Development Authority is set to hold a public hearing Thursday, Oct. 4, to discuss the... read more