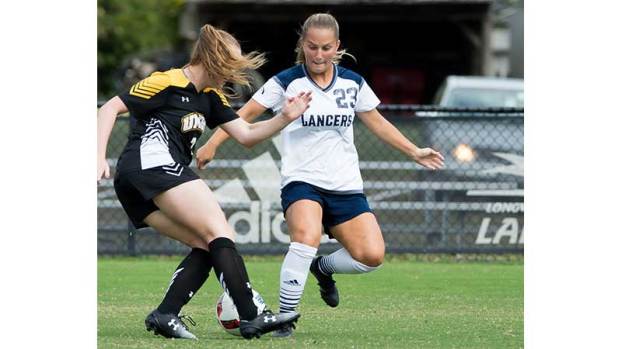 Longwood University senior forward/midfielder Paige Robertson, right, scored two goals in a span of about seven minutes Sunday to help give her team its first win of the season. (Photo by Mike Kropf / Longwood Athletics)

Longwood University forward/midfielder Paige Robertson waited years for her turn in the spotlight.

So when Robertson’s long-awaited moment unfolded in front of her during a split-second turn of events late in Sunday’s game against commonwealth rival the University of Richmond, her mission was simple.

“I kept thinking over and over, ‘Don’t mess this up. Don’t get over-excited,” she said.

Robertson scored the first two goals of her career in game-breaking fashion, punching in the go-ahead strike in the 77th minute and adding another seven minutes later to jumpstart an endgame onslaught that sent Longwood past Richmond 4-0 in the Lancers’ home opener at the Longwood Athletics Complex.

The first of those goals came on a laser-like cross from sophomore Kennedy Culbreath that Robertson’s fellow senior forward Sheyenne Stretz nearly took for herself, only to peel off at the last second at Robertson’s direction.

“I told Sheyenne to leave it, and I just tried to place the ball as best I could,” she said. “It went through the defender and the goalkeeper, and I ended up on the end line thinking I had no idea how that happened.”

While Robertson’s recollection of the goal was fuzzy at best, her teammates witnessed it first-hand and swarmed her on the field. Seven minutes later, they did it again when she corralled a deflected pass in the box and, once again, laced it through traffic and just inside the left post to give Longwood a 2-0 lead.

From there, reigning Big South Freshman of the Year Carrie Reaver and senior Kelly Almeida followed Robertson’s two goals with matching long-range strikes of their own, but it was Robertson’s goals that stole the spotlight … twice.

“Paige Robertson has stayed positive and worked her socks off for four years to have a night like that,” Longwood Head Coach Todd Dyer said. “It just goes to show what perseverance and a team-first mentality can lead to.”

In total, the four-goal flurry that Robertson jump-started came in a span of just 12 minutes and sent the Lancers to their first win over Richmond since 2015. In a conciliatory arc of redemption, that win also came against Richmond’s first-year head coach, Marty Beall, who was head coach of Big South rival High Point University in 2017 when the Lancers fell to the Panthers 1-0 in the Big South Championship game.

“That result against that program coached by that coach is very meaningful for our program,” Dyer said. “It was a tight, even game in the first half, and we just found a way to raise our energy level in the second half.”

Sunday’s shutout over the Spiders came by way of a staunch Lancer back line led by marathon 90-minute efforts from Big South Preseason Defensive Player of the Year Sydney Wallace, a senior, and junior Erica Sieben.

“Our team’s all about culture, so when we step on the field we’re just bettering that culture,” Robertson said. “We just want to build that championship culture that Longwood softball has. We admire that team so much. … We’re relentless. Watch out because we’ll never give up.”

The win was Longwood’s first against Richmond since a 1-0 victory in 2015 and marked the Lancers’ largest margin of victory since a 5-0 win against Gardner-Webb University in 2016. Longwood, which advanced to the Big South Championship game for the first time in program history last season, has now won four straight games on its home field and is 7-2-1 at home since the start of the 2017 season.

The Tigers visit American University on Thursday at 5 p.m.