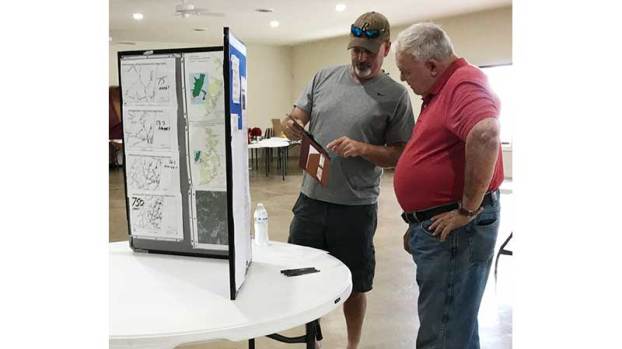 A public meeting set for Aug. 28 is expected to provide additional details on the next steps for the proposed Green Ridge landfill, including an application process for a permit for the Virginia Department of Environmental Quality (VDEQ).

The meeting will be held 5 p.m. at Cumberland Elementary School.

“Green Ridge Recycling and Disposal Facility, LLC, intends to apply for a permit to operate a sanitary landfill in Cumberland County,” a public notice for the meeting cited.

The public notice cited that the meeting would cover the proposed siting, location and operation of the landfill.

The Cumberland County Board of Supervisors voted 3-2 to approve the landfill community host agreement with three changes, including eliminating fly ash as an acceptable waste, making County Waste of Virginia, LLC the guarantor of the agreement in place of Green Ridge, LLC and establishing an assurance plan for homeowners.

Earlier, they voted to approve a rezoning request and conditional use permit for the landfill on June 29. Green Ridge is expected to span approximately 1,200 acres off Route 60. The rezoning request rezoned 15 tax map parcels from Agricultural-2 (A-2) and Residential-2 (R-2) to Industrial (M-2).

The construction is expected to take place in two stages, with the western side of the landfill expected to be built first, followed by the eastern end.

In a statement attributed to County Waste of Virginia Senior Vice President Jerry Cifor, the meeting is meant to allow public participation.

“Now that the host agreement has been approved, we are moving forward with our Virginia DEQ application for a solid waste management facility,” he said. “An important part of that process is gathering public comment and we look forward to providing citizen input to the department. While this isn’t the only opportunity for public comment, we encourage members of the local community to participate on the 28th.”

Cumberland County Landfill Awareness Group, an organization operated by members of the community concerned about the landfill and taking action to stop its progress, held a community meeting Sunday to discuss steps going forward in light of the Board of Supervisors’ approval of the host agreement.

The meeting also discussed gaining support on the state level. The meeting follows two court hearings over the past few weeks, on July 30 and Aug. 7 at the Cumberland County Circuit Court in which retired 13th Judicial Circuit judge Melvin Hughes Jr. ruled to deny a request for an injunction, or a cease and desist order to prevent further activity on the landfill until November. Hughes, on Aug. 7, also denied a request for a referendum, which would allow the landfill issue to be on the ballot in the upcoming November election.

Trudy Berry of Lunenburg and candidate for the 61st district House of Representatives, said Christal Schools, during the meeting, reviewed the timeline of events leading up to the signing

Christal Schools welcomed everyone to the meeting, stated the purpose of the meeting, and reviewed the agenda with everyone. She then reviewed the timeline of events that led up to the signing of the Host Agreement between Cumberland County Supervisors and County Waste LLC.

“The timeline was displayed on poster board at the back of the room, along with a map of the proposed landfill site,” Berry said. “She then let everyone know what they could do to show their opposition to the construction of the Green Ridge Recycling and Disposal Facility.”

She said the Cumberland County Landfill Awareness Group Leadership Team provided preprinted letters/petitions addressed to Senators Mark Warner and Tim Kaine for people to sign. Leadership provided sign-up sheets for people to volunteer to canvas to reach people who are not connected to the internet and don’t have cell phones.

There were also “No Dump” yard signs and stickers available for people to take.

Participants were able to donate to the group’s efforts, including covering the cost of printing and legal representation.

The group is filing for LLC status, and donations will be deposited in an account.

“Bill Bruce spoke about his process of filing for an injunction and referendum, citing applicable federal and state laws, and the appeals process,” Berry said. “Bruce Allen also spoke about his personal actions to oppose this mega landfill.”

The meetings are expected to take place monthly, with continued updates of the landfill’s progress and actions to halt its progress.