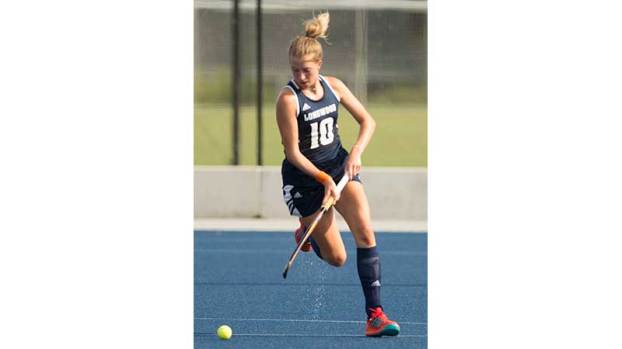 Longwood University senior forward Leonie Verstraete will be a key leader in 2018 for the Lancers. (Photo courtesy of Longwood Athletics)

The Longwood University field hockey team was predicted to finish third in the 2018 preseason coaches’ poll, as announced Wednesday by the Mid-American Conference (MAC), after an 11-6 season in 2017, including a program-best 4-2 mark inside MAC play.

With three returning All-MAC performers, the 2018 version of the Lancers field hockey squad looks to reload and make another deep run into the postseason after back-to-back semifinals appearances.

First-team honoree Leonie Verstraete and second-team performers Clara Meschini and Katie Wyman return after strong campaigns a season ago, while a plethora of returners and fresh faces look to fill in and contribute to strong forward, midfield and defensive lines.

New to the preseason poll this season was the Tournament Champion poll. Miami received five of the seven tallies while Appalachian State University and Kent State each collected one.

The Mid-American Conference is set to introduce a new championship format with all seven teams participating in the tournament. Under the new format, the top two seeds will receive a bye into the semifinals, needing only two wins to capture a tournament title.

Longwood kicks off its quest for a MAC Championship on Friday when Bucknell University comes to Elizabeth Burger Jackson Field to face the Lancers in the culminating event of the ninth annual Greatest Athletics March Ever (G.A.M.E.).