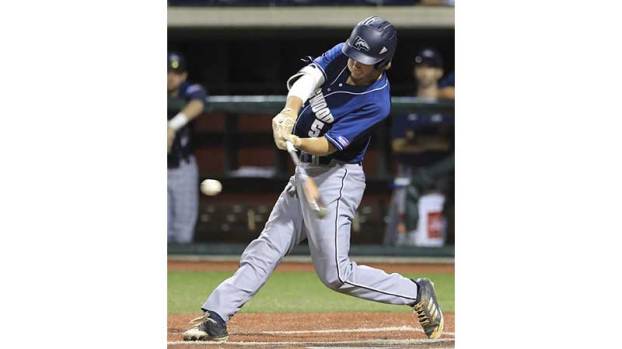 Longwood University rising senior outfielder Eric Crain has been hitting better than .330 this summer for the Edmonton Prospects in the Western Major Baseball League. (Photo courtesy of the Big South Conference)

Longwood University provided an update on six of its baseball players in a July 25 press release. Nate Blakeney, Daniel Brandon, Eric Crain, Nick Fuchs, Jawan McAllister and Antwaun Tucker are each competing in premier summer leagues across America and Canada.

Nate Blakeney has been limited to just 14 games this summer, last playing June 28 for the Asheboro Copperheads. Longwood’s power-hitting infielder is primed for a big season as the rising junior is the returning leader in a number of offensive categories, including average (.260) and hits (53).

Daniel Brandon has averaged a strikeout per inning with the Harrisonburg Turks this summer and posted a strikeout-to-walk ratio of better than 2:1 through 14 appearances. Recently Brandon has been in decent form, holding opponents to five hits and two walks in the last four outings, spanning 4.2 innings pitched. On the season Brandon has struck out at least one batter in 12 of his 14 appearances.

After a nine-game hitting streak raised his average from .250 to .383, capped by a 4-for-6 game with three runs scored July 17, Crain has established himself as one of the top threats in the Edmonton Prospect lineup and is holding down cleanup duties. He is third on the team in average and has collected eight multi-hit games in 21 games played.

Nick Fuchs has been a reliable arm for the Butler BlueSox, picking up a win in half of his starts this season. After a great start to the summer, Fuchs finished strong by coming within one out of a quality start July 12 against Chillicothe with 5.2 innings of three-run ball and 10 strikeouts. Fuchs is likely done for the summer, being shut down with an injury July 14.

Jawan McAllister was a bright spot for the D.C. Grays throughout the summer as a power threat at the plate and a threat to go on the bases. He picked up eight extra-base hits in 33 games and stole 15 bases in 16 tries. He’s tied for seventh in the league in stolen bases. His play helped the D.C. Grays finish second in the Cal Ripken Collegiate South, qualifying for the playoffs. McAllister ended his season with a 2-for-4 game and two RBIs, also drawing a walk in the first round of the League Championship Series on July 22.

A great start to the season for Antwaun Tucker earned him a spot on the CPL Select Team, a unique opportunity for Coastal Plain League (CPL) players to compete in an exhibition against the USA Baseball Collegiate National Team on June 27, but Tucker missed that game and has been sidelined with an injury since June 21. The rising junior played in just 13 games this summer.