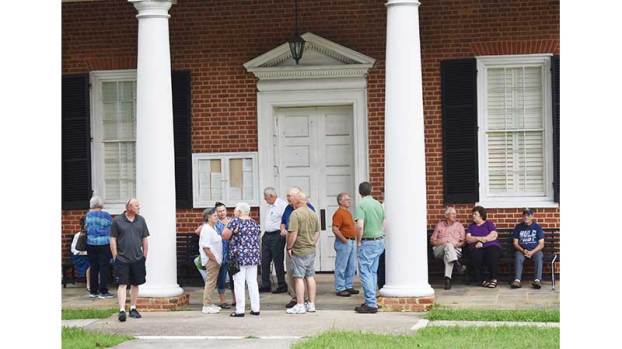 Participants gather at the Cumberland County Courthouse Monday to discuss an upcoming hearing related to the landfill. (Photo by Emily Hollingsworth)

The judge of a court hearing Monday for a motion to approve an injunction for the Green Ridge landfill said his opinion was expected to be released Tuesday.

The ruling from the judge and other details will be released in the Friday edition of The Herald and online at www.FarmvilleHerald.com.

The court case was held at 10 a.m. Monday. The judge hearing the case was Melvin Hughes Jr., a retired judge for the 13th Judicial Circuit.

Judges from the 10th Judicial Circuit, which represents Cumberland County, recused themselves from the case.

The injunction would act as a sort of “cease and desist,” preventing the county from taking further action on the landfill until the day after the election, William “Bill” Bruce, the plaintiff who filed the injunction, said.

There are separate court hearings for the motion to approve the injunction and to approve a referendum, which would allow residents to vote about the landfill in November.

The court hearing for the referendum is scheduled for Aug. 23.

Trudi Bailey, of Powhatan, said she was concerned about the landfill project’s effect on Cumberland and Powhatan residents.

“I can’t believe anyone would want to stop anyone from holding a referendum,” Bailey said. She said the believes the decision to place the project in the area of Route 60 fails to give Powhatan residents the option or power to take action.

Chris Rankin, of Cumberland, attended the hearing with his wife and grandson and said he was positive about what the outcome of the case could be.

“Just that we managed to get this hearing moved up is a good sign,” Rankin said.

Bruce said Friday that the court hearing, initially scheduled for Aug. 23, was approved to move up to Monday due to a special called meeting concerning the community host agreement between the county and Green Ridge, LLC Aug. 2.

He said he heard about the project in June after neighbors told him about the petition to hold a referendum.

“My feeling is the supervisors did little to let the county know what was going on,” Rankin said.

The courtroom was filled with some standing in the back row.

Bruce requested that the hearing for the referendum also be held during Monday’s hearing, but the judge ruled it out.

Bruce contended that the time between the initial announcement for the landfill facility at the end of May and the time the rezoning request and the conditional use permit was approved by the board of supervisors early June 29 failed to give residents enough time to be completely informed of the situation.

Bruce said while the county advertised the meetings under proper legal standing, he said the county exercised only the bare minimum.

He said he filed the request to petition June 13, and it was granted by the Cumberland County Circuit Court June 15. Bruce said he and other residents were able to collect more than 1,000 signatures in six days and submit to the county. He said close to 300 of the signatures were dismissed, but said the amount of signatures needed to hold a referendum still exceeded the requirement by approximately 200 signatures.

Bruce said at the time the signatures were approved, the board had not yet made a decision regarding the landfill.

Bruce had a display that contained days in the month of June, and pink and green stickers that represented the number of meetings the county held in reference to the landfill. There were four meetings concerning the landfill between June 7 and June 29, not including a community meeting held by District Four Supervisor David Meinhard or community meetings held by residents of Cumberland and Powhatan counties.

Hughes asked if the landfill was approved despite objection. Bruce said yes and offered documentation of a reported 10 emails that relay support for the landfill. He said 12 were initially included in a FOIA request, but said one email was a duplicate, and one had a statement that would approve a landfill with certain conditions, but stated in the email that the conditions were not met, therefore the person did not approve of the project.

Hughes said that the Virginia Department of Environmental Quality (VDEQ) would still have to determine whether the landfill project could move forward.

Bruce contended that the local government could not be harmed should the injunction be approved. He said he is only asking for less than three months, until November’s election, for the board to not take further action on the landfill project.

L. Lee Byrd, of Sands Anderson law firm, representing the Cumberland County Board of Supervisors, said that a condition of an injunction is whether the project in question would present an imminent or immediate threat to citizens in the area. He said as the process to begin development on a landfill can take approximately 18 months, he said there arguably would not be immediate or imminent harm to the area. He said County Administrator and County Attorney Vivian Seay Giles was unable to attend Monday’s hearing.

William Shewmake, attorney for Green Ridge, LLC and County Waste of Virginia, spoke during the hearing and said while Green Ridge is not an official party to the case, he said the company could sustain substantial damages depending on the decisions made.

Hughes asked whether the board of supervisors’ decision to approve the conditional use permit or rezoning request was appealed by citizens in the county. An appeal is typically defined as an application to a higher court for a decision to be reversed.

Bruce said he was not 100 certain if there was an appeal filed in reference to the board’s decision.

Bruce said in a phone conversation following the meeting that he and other citizens were set to file an appeal to the board’s decision to rezone the property for the landfill from Agricultural-2, with a portion zoned as Residential-2, to Industrial-2 (M-2) at the end of the day Monday.

A special called meeting is set to be held by the board of supervisors Thursday, 7 p.m. at Cumberland County Elementary School about the community host agreement between the county and Green Ridge, LLC, and about the county’s health insurance.

Macado’s, at 200 E. Third St., is remodeling the outdoor portion of its restaurant, officials from the restaurant confirmed. The... read more