Ward is credited as being the first black mayor of Chesapeake and also the longest serving, among many accomplishments during his life. 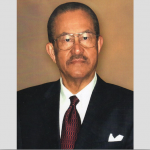 According to his obituary, Ward was born Dec. 1, 1933, in Lunenburg County. He attended school at the Bluestone Harmony Academy and graduated from Central High School in Charlotte Court House.

Keysville Resident Pamela K. Pettus said she attended the funeral at the Chesapeake Conference Center, as well as Drakes Branch residents Thelma and James Jones. Over 600 people were in attendance at the event.

According to information from the Chesapeake Conference Center, the center encompasses the William E. Ward Ballroom, named in Ward’s honor for his service on the Chesapeake City Council. John Hughes, of the Charlotte High Alumni Association, said he was familiar with Ward because Ward grew up in Keysville and Hughes himself also lived in the Keysville area.

“I knew him when he was a young man …,” said Hughes. Hughes said Ward attended Central High where he played on the basketball team. He also said Ward was a very smart man and came from a nice family.

Hughes said Ward served as parliamentary for the Charlotte High Alumni Organization for a number of years before falling ill. His obituary said he went on to receive a bachelor’s in history, a master’s in history from Virginia State University and master’s and doctorate in American and African- American history from Clark University in Worcester, Massachusetts.

“In 1959, Bill began his career as a history teacher at I.C. Norcom High School in Portsmouth, Virginia. Later, moving to the collegiate level in 1969, Dr. Lyman Beecher Brooks offered Ward a teaching position at Norfolk State University where he served as a professor and chair of the history department until his retirement in 2000,” according to Ward’s obituary.

The obituary said during his time at Norfolk State, Ward was also an active member of the Faculty Senate and served in the capacity as president for two years, between 1975-77.

According to a press release from the Urban League of Hampton Roads Young Professionals, although Ward retired from elected office in 2004, he still remained a fixture in the African- American community.

“A mighty tree has fallen from Chesapeake City and the Hampton Roads region,” said the release. “Mr. William “Bill” Ward has been an advocate and champion for the African-American community since his call to public service.”

During his time, Ward wore many hats, including serving as the first black Mayor of Chesapeake. His obituary said he was elected mayor in October 1990 and served 10 years after re-elections in 1992, 1996 and 2000. In his honor, a street in Chesapeake was named for Ward, Mayor