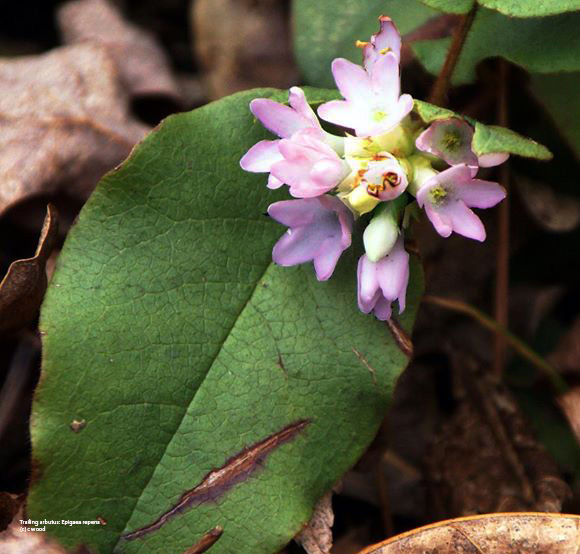 Nearly 10 years ago, I found some trailing arbutus (Epigaea repens) at Holliday Lake on the Lakeshore Trail. It was more than halfway around the lake from the park office, a long hike. I just happened to be in the right place at the right time.

Every year since then, I’ve thought about this little plant, but never quite managed to get to the far side of the lake at the right time. Until this year. I happened to mention to a friend that I really wanted to find some trailing arbutus this year, and he immediately responded that there was quite a bit at Twin Lakes, not far from where I live.

So off we went – through several thickets, down a hill and over some large rocks. And there it was, trailing arbutus in bloom, just waiting to be admired. I mentioned this good fortune on my Facebook wildflower page and got a message about a large colony at Holliday Lake, on the far side of the lake, but not in the same location as what I found earlier.

Trailing arbutus is a very old plant that has probably survived since the last ice age. It isn’t rare in our area, but it’s not necessarily easy to find. It’s a very low-growing, creeping evergreen plant that tends to form mats and isn’t usually more than 4-6 inches tall. The leathery leaves are fragrant when crushed, and can look quite beat up by late winter. The waxy, bell-shaped blooms are white when they first open, then become pinkish with age. They are typically quite fragrant, although the ones I saw this year weren’t. The flowers are followed by whitish, raspberry-shaped fruit.

Where to look for trailing arbutus? It tends to grow in rocky, somewhat acidic areas – on steep, barren banks, around boulders – in pines or mixed woods. This habitat isn’t always easily navigated – so you almost have to be on a mission to find a small patch of trailing arbutus.

I doubt that I could ever relocate the patch at Twin Lakes that a friend showed me.

In New England, trailing arbutus is often called “Mayflower” or “Plymouth Mayflower” because it’s supposedly the first spring flower that the Pilgrims saw after their difficult winter. Native Americans used trailing arbutus to treat a variety of ailments, including rheumatism, diarrhea, abdominal pain and indigestion.

Although many native plants can be successfully used in our home gardens, this one is very finicky about growing conditions. It doesn’t like to be disturbed or moved, and is probably dependent on a very specific mycorrhizal association that isn’t clearly understood yet. Enjoy it where you find it in the woods, but don’t disturb it. Make notes about the location so that you can find it again and again.