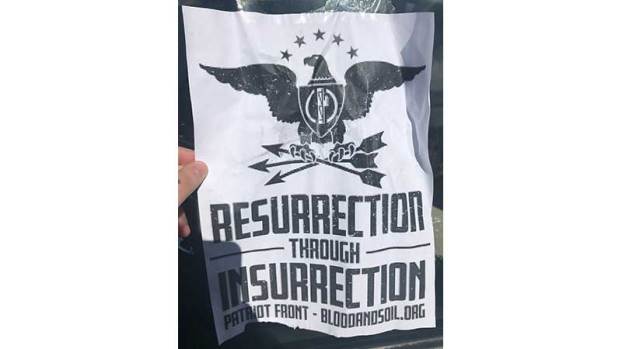 Pictured is a flyer from Patriot Front, an organization that purports white nationalism. Similar flyers were found by students and a Longwood police officer March 22 and 23 in the areas of Midtown Landings and outside Ruffner Hall. (Photo by Samantha Rinchetti)

A series of flyers from an organization cited to affirm ideas of white nationalism were found in the areas of Midtown Landings in the Town of Farmville and Ruffner Hall at Longwood University,

A March 28 article in The Rotunda, the university’s student-run news source, cited that several versions of the flyers were found at Midtown Landings and outside of Ruffner Hall by Longwood students and a Longwood police officer.

Patriot Front purports on its website that, “America needs a generation of brave men to fearlessly rise to face all threats to their collective interests. A generation steeled in their effort to realize their grand vision of a new nation.”

Longwood Spokesman Matt McWilliams said Wednesday, in response to the March 22 and 23 incidents, that Longwood students and officials have held dialogues about the flyers.

“As at almost any public university, it is not uncommon for people from beyond the Longwood community to try to post on campus materials espousing a range of ideas, some of them deeply offensive to our values as an institution,” McWilliams said. “In responding we always work to balance reaffirming our values without unduly providing those who espouse hateful views the undue credibility and attention they crave. Longwood’s Student Government Association has been briefed and discussed the matter at its regular meeting, President Reveley has shared with the Longwood community a message reaffirming our values, and we will continue to monitor the situation.”

“Our mission at Longwood is nurturing citizen leaders. We are confident our students — regardless of their background and beliefs — know they are welcome here, stand strongly opposed to those who would try to divide us and can argue against or turn away from repugnant and discriminatory words they encounter,” McWilliams said.