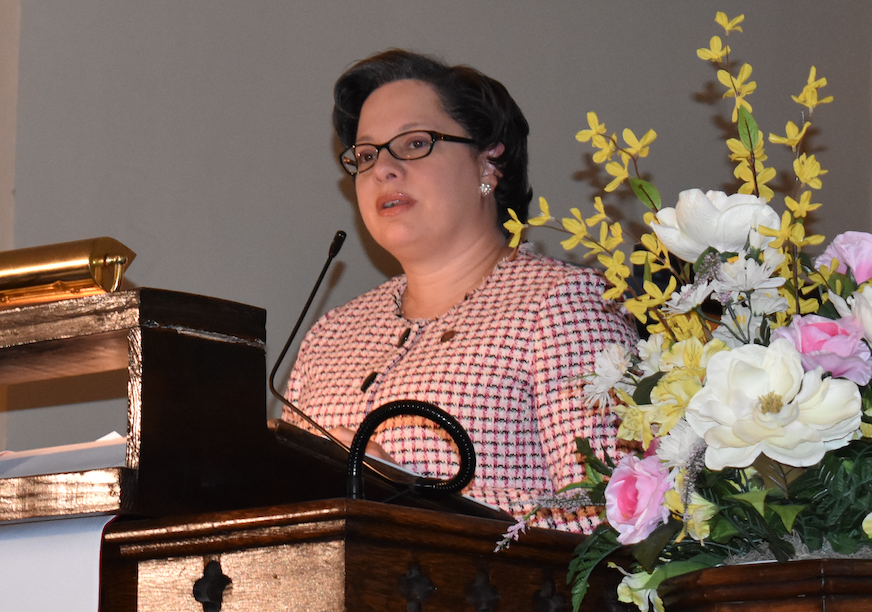 Area leaders and participants gathered at First Baptist Church Tuesday where Dr. Martin Luther King visited in 1962, to remember King’s messages prior to his assassination on April 4, 1968, and discuss what still needs to be done to achieve the goals for which King advocated.

The forum, called “Beloved Community Conversations,” is named after King’s concept that describes what needs to be addressed to achieve a community based on justice, a “beloved community.”

Sen. Jennifer McClellan, who is also chair of the Dr. Martin Luther King Jr. Memorial Commission from the Virginia General Assembly, said the series of forums, which commemorate the 50th anniversary of Martin Luther King’s assassination, also details the impact King had in the commonwealth. Farmville was the third location for the forum, with previous forums taking place in Richmond and Charlottesville.

“What many people don’t realize is just how many ties to Virginia Dr. King had,” McClellan said.

Dr. Martin Luther King attended First Baptist Church on 100 S. Main St. on March 28, 1962, and spoke a message during the height of Massive Resistance, black children were locked out of the public school system following a decision by the county in 1959, two and a half years before, to close the public schools after segregation became unconstitutional. A portion of this sermon was published in The Farmville Herald.

“We all realize that if we are to be free, we cannot sell our birthright to freedom for a mess of segregated pottage,” King said. “Stand firm, and things will get better. Do not despair. Do not give up, but just stand firm for what you believe in, and people all over will say that these children have injected new meaning in the veins of civilization.”

Speakers during the forum included Skip Griffin, son of the Rev. L. Francis Griffin, who was at First Baptist Church when King spoke.

A question and answer period for the audience took place after the forum.

Griffin said while he did not remember a lot of what King said when he was in Farmville, he remembered King’s impact on the congregation during a challenging time.

“We need to try to create opportunities where people can experience one another as human beings,” Griffin said.

Ghee, during the panel, described his experience moving to Iowa to attend school after Prince Edward County schools closed. He said he was in Iowa when King came to speak.

He said during the time King visited, the black community was faced with the question of whether to attend a segregated, private black academy proposed by the white community and chose to continue advocating for public education.

“I believe that that speech in 1962 about standing firm was an indication to us all of how important it was for us, as a black community, to stand firm to protect public education,” Ghee said.

“If you were divided, there would be a hodge-podge community that no one would appreciate,” Ghee said.

Ghee said he did not experience hostility when he became the first practicing African-American attorney in Prince Edward County, and he said the area has moved forward in uniting the communities, including installing the beacon of reconciliation at the Prince Edward County Courthouse and Longwood University issuing a public apology to those affected by the closing of schools. He said on a national level, following the white nationalist rally in Charlottesville in August 2017 that claimed the lives of three people, that the white religious demographic needs to address issues of racism within their demographic and work to create change.

Holcomb, like Ghee, was asked to describe the environment of the area in 1962 following school closings. She said families were divided as children were sent away to schools in other areas, some to other states. She described seeing the long-term effects after returning to the area and working with clients as the first minority professional staff with the Virginia Employment Commission in Farmville.

“If I had to say why Dr. King came, even though I heard a lot about his visit, I would have to share what my dad told me one time: He said, ‘when someone is in trouble and need help, those folk who usually show up are those who care,’” Holcomb said. “I think that Dr. King cared when he came to Farmville, Virginia.”

She advocated for the importance of uniting the community when describing the people of different races she worked with to combine the libraries in Prince Edward and Farmville, which had been separated by race.

“I think they felt they could come here and offer their services through SCLC,” Ashton said. “But I didn’t think they realized they would find a proud community here. A strong community. A community that found a faith-based hope.”

Clark said while she sees progress and hope in the county concerning race relations, she felt issues advocated by King, including civil resolutions to conflict, have been lost in society today, particularly from people of power.

“Until individuals recognize that a wrong was committed here, we cannot move forward,” Clark said. “I think we have good people in our community who are working together, but I still think that, as always, there is more work to be done.”

Patterson spoke about issues, such as poverty, affordable housing and public school funding that would need to be addressed.

“The beloved community will be achieved when we consult that triple threat of racism, poverty and militarism, as Dr. King stated,” Patterson said. “I think here in our community we continue to work toward that by remaining honest about the issues that we face.”

Utzinger described a quote from King that states:

“We must face the fact that at 11 o’clock on Sunday morning, when we stand to sing ‘In Christ there is no east or west,’ we stand in the most segregated hour of America.”

“The possibility that with and among our religious communities, we can have a foundation to make political and social issues and moral issues, which is exactly what they are,” Utzinger said.