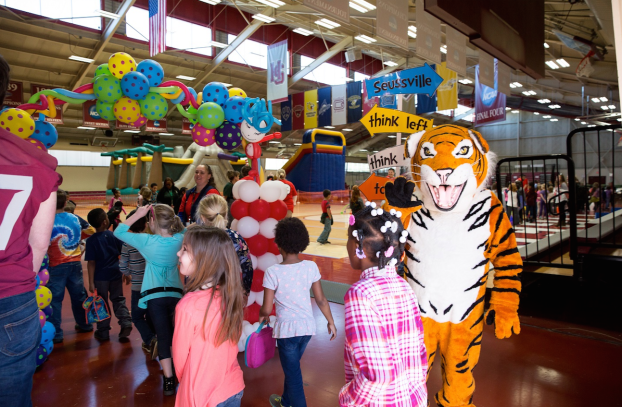 More than one thousand second grade students from the Heart of Virginia celebrated Dr. Seuss’ birthday and literacy at Hampden-Sydney College (H-SC) at a Dr. Seuss themed birthday bash.

According to a H-SC press release, this year was the second year that President Larry Stimpert and his wife Lesley Stimpert hosted the children as part of an expansion of H-SC’s Literacy Program, which began in 2000 with former president Walter M. Bortz III who had the desire to “demonstrate in a small way our commitment to reading as well as tighten the bond between the College and the local community.”

According to H-SC Coordinator of Local Media/Assistant to the Director of Marketing and Communications Parker Nixon, the event was split into two days and saw students from Amelia, Appomattox, Buckingham, Charlotte, Cumberland, Lunenburg, Nottoway and Prince Edward counties as well as Fuqua School. She said games that students played included “Hop on Pop,” where students filled the Tiger’s baseball cages with balloons, and then popped them using anything but their hands; Green Eggs and Ham tic-tac-toe, “Pin the Hat on the Cat” and “Ten Apples up on Top,” a relay race based upon the book’s main characters.

She said next year H-SC will continue to adapt the games and schedules based upon school participation, volunteers and donations. She also said Wal- Mart, McDonalds and Magic Special Events provided donations.

“There were also individuals who donated money to purchase the books,” Nixon said.

Grammy winner to perform at H-SC