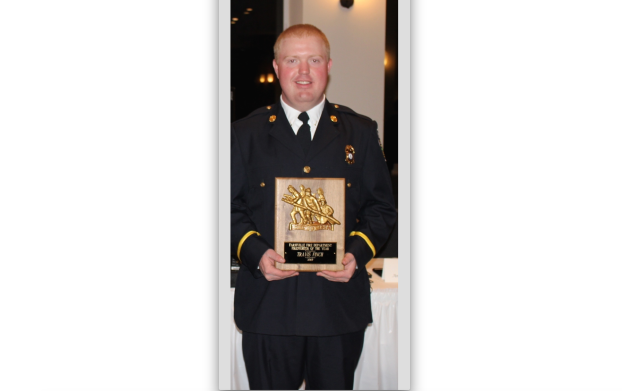 Travis Finch received the Firefighter of the Year award in December 2017.

Travis Finch, 22, a Prince Edward County native, is known for his work with the Farmville Volunteer Fire Department.

Finch, son of Rhonda and E.C. Finch, graduated from Prospect Christian Academy and works as a firehouse attendant at the Farmville Volunteer Fire Department.

“I started working with (the Town of Farmville) when I was 17, with a summer job, I worked with the horticulturist four years full time with him, and one year part-time,” Finch said. “Then I transferred (to the fire department) back in November.”

He said he was passionate about working with the fire department. His current job sees him maintaining equipment at the firehouse as well as making sure the department is tidy.

“I’d like to see myself either stay here or possibly find another job somewhere like Richmond, I do like (the) Richmond fire (department),” Finch said. “It’s something I could see myself doing for the rest of my life.”

He said he likes to help out the community and the adrenaline rush from doing it.

“A big thing is the community, being able to give back to them,” Finch said.

He said he used to draw and play guitar in his free time, but he doesn’t do so as much anymore.

THE WORD: A gift of divine prayer

“I have given them the glory that you gave me, that they may be one as we are one. I... read more