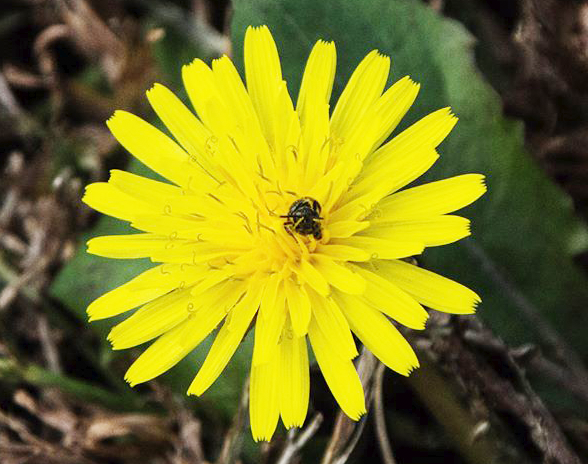 Dandelions. Children are endlessly fascinated by them. They’re often the first flower that kids can identify, and probably the only one that they can pick without getting into trouble. If you’re little, blowing on a dandelion seed head can answer thousands of existential questions. Homeowners, however, usually hate dandelions, and spend countless hours trying to eradicate these pesky plants from their perfect lawns.

Love them or hate them, dandelions are found all over Virginia and much of the world.

The dandelion (Taraxacum officinale) was known to the ancient Egyptians, Greeks and Romans who used it for food and medicine. Years ago, it was even a much-loved garden flower in Europe. How times have changed.

The dandelion was brought here in the early 1600s by European settlers who cultivated it for food and medicine. It probably also reminded them of home. Unfortunately, the dandelion quickly escaped garden plots and spread across North America.

It’s a very tough plant, capable of growing just about anywhere — in crevices, sidewalks, crumbling pavement, even poor soil. The dandelion can withstand hot, dry conditions, and somehow manage to survive snowy conditions too. Dandelions grow very quickly, going from buds to flowers to seeds wafting on the wind in days. They also live for many years and have incredibly long roots.

• Dandelion flowers open when the sun is shining and close in the evening and on cloudy days.

• The flower is really a head of tiny florets that reflect ultraviolet light, which attracts bees that feed on the pollen and nectar.

• According to one report, more than 90 species of insects visit dandelions.

• Dandelions channel much of their energy into attracting pollinators, but don’t need to be pollinated to set seeds. The female parts of the flowers develop seeds through apomixis. Thus, the offspring of each plant are genetically identical to their parent. They are clones.

• Dandelions originated in Eurasia before the last Ice Age and spread rapidly as glaciers retreated.

• Humans discovered the benefits of dandelions eons ago.

Young dandelion greens make quite tasty salads and can be found in most upscale supermarkets where they’re quite expensive. The flowers make excellent wine, and the root can be roasted to make a substitute for coffee. Native Americans used dandelions to treat skin diseases and kidney ailments. In traditional Chinese medicine dandelions are used to cure stomach problems.

Dandelions aren’t native, but they’ve often been praised for their cheerfulness and beauty. Wallace Nutting, the New England landscape photographer, called them our tulip in the grass and noted that, “It is so thoroughly at home that we feel it to be the most prominent and persistent Native American, whatever its origin.”

Yes, dandelions are the introduced species that’s been here so long that many people forget they’re not native. The weather still isn’t settled. Some days it’s spring, and some days it’s back to winter. Enjoy the hardy, cheerful dandelion and forget about the lawn.

Cynthia Wood is a master gardener. Her email address is cynthia.crewew23930@gmail.com.