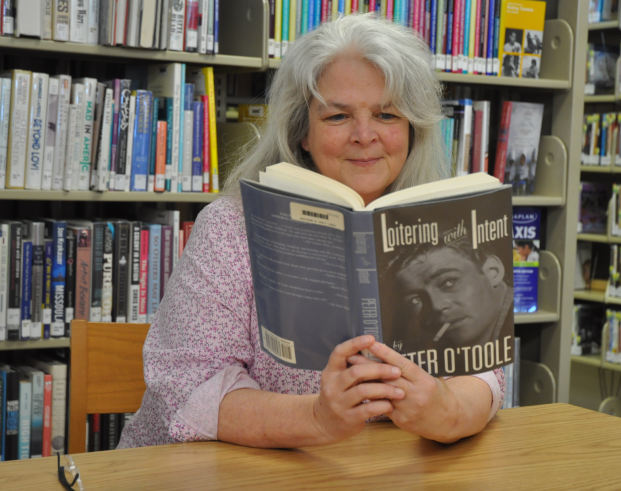 Grace Barlow recounts dancing with James Bond after crashing a private party in London filled with those who were in route to Welsh actor Richard Burton’s Switzerland-based funeral in 1984. The James Bond she danced with was none other than Roger Moore, who played the British spy in seven films spanning from 1973 to 1985. At 52, the Buckingham County Branch Library librarian assistant now lives a much simpler life.

“The whole motivation of really moving out here for (my husband Paul Barlow) and I was getting back to basics,” Grace said. “We sold a five bedroom house and now we live in a two room house. We’ve had stuff that we moved with us in our shed that we haven’t used so we’re getting rid of everything.”

Grace and her husband Paul moved to Buckingham County five years ago from Fredericksburg. Talking about visiting Buckingham for the first time, she described it as “love at first sight.”

“It was close enough to Fredericksburg, where our kids were still, but far enough away to where we wouldn’t be a pain to them and we fell in love with Buckingham,” Grace said. “It’s beautiful and its quiet, it’s almost like going back in time in a way.”

While crashing London parties may be in her past, Buckingham has allowed Grace to continue her life as a “free bird.”

“Downsizing I think, you know, some people in our families thought we were crazy but we haven’t watched tv in five years. It’s that freebird thing,” Grace said. “You’re just living with your basic necessities

(, and it) gives you the freedom. You’re not weighted down. We’ve had the opportunity to get cable and stuff like that but, why? Why go back now?”

Grace and her husband Paul came to Buckingham with the intention of being hobby farmers.

“The reality of how hard it is set in after the first year. We lived in our little shed without running water, plumbing or electricity for almost two years while our house was being built,” Grace said. “We learned that we’re much better at raised bed gardening than farming.”

Before coming to the county, Grace raised four kids in Fredericksburg while running a cleaning company, being involved with theater and sold blinds.

She cites “Loitering with Intent,” the british “Lawrence of Arabia,” actor Peter O’Toole’s autobiography as being a favorite book.

“He was just such a crazy guy and I really love some of the situations he got himself into, I kind of identify with that,” Grace said. “We all have a past.”

Now, she says that she’s never been happier living in Buckingham with the love of her life, Paul.

“It’s a dream job,” Grace said regarding her job as librarian assistant. “I love the people I work with. The people that come in are fantastic and I feel like the library is the heart of the community, just like a church is.”

She said the library provides an awful lot of information and services for kids.

“Today I’m working on pin the bee on the sunflower. I get to play with kids and being surrounded by all the books and everything,” Grace said. “It’s a learning experience and I just love being involved in the community. We converted the whole library into a mini golf course the other night. How cool is that? It’s wonderful.”

THE WORD: No need to walk alone

As we continue our journey together through Lent, we are reminded that we are to reflect on our relationship with... read more