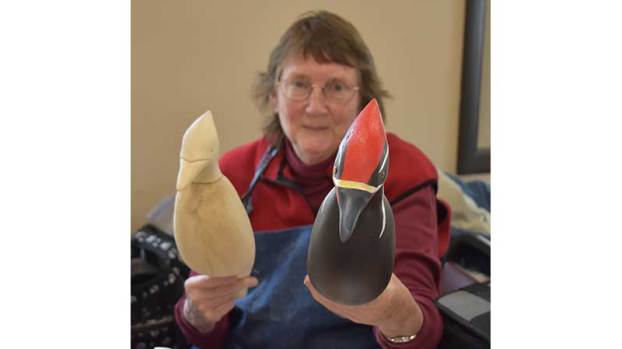 Linda Novacek shows off the bird she’s carving, using a previously finished one as a guide.

Participants from across the U.S. spent time this week at the Holliday Lake 4-H Educational Center for workshops involving decoy carving or traditional flintlock rifle building.

She said for the flintlock workshop, there are usually only six people per class due to how intense it can get for the instructor, Jimmy Blanks. During the class firearms are assembled and capable of firing.

“The student will be instructed on shaping, rasping, sanding, carving and staining the stock and filing and buffing of metal parts,” according to a news release.

Mike Neville — a participant from Santa Maria, California — said he’d shot black powder rifles since 1980 and this was the only place he’d known to offer the opportunity to build them.

“There’s probably others, but this is the only one I’ve ever found,” Neville said.

He said he’d visited Holliday Lake in September to take the same workshop.

Benninghove said between the two workshops, there were approximately 22 attendees.