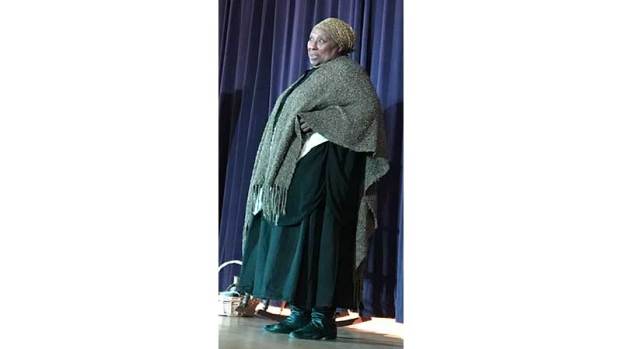 “The Spirit of Harriet Tubman,” held Tuesday evening at the Moton Museum, brought more than 100 people to the museum auditorium. Pictured is Diane Faison, who is recounting Tubman’s life and legacy. (Photo by Cainan Townsend)

Members of the Farmville community may have caught a glimpse of the life and legacy of activist and abolitionist Harriet Tubman through the performance by Diane Faison Tuesday at the Moton Museum.

“The Spirit of Harriet Tubman” showcased Tubman and “some of her thoughts on the Underground Railroad and some of her driving inspirations,” a release from the Moton Museum cited.

Faison, an art and art education instructor for more than 25 years, had taken graduate courses at Longwood University and the University of Virginia, Faison’s website cited.

“Mrs. Faison’s portrayal of Harriet Tubman’s spirit was beyond moving,” Clark said. “Feelings were stirred within me that I really haven’t felt before. Faison was able to transcend time and space through her performance, and I forgot where I was. To be able to feel Tubman’s anguish, fear, and victory was something that took me through feelings of anger, sadness, exuberance, and perhaps more than anything else — pride for my heritage and ancestors.”