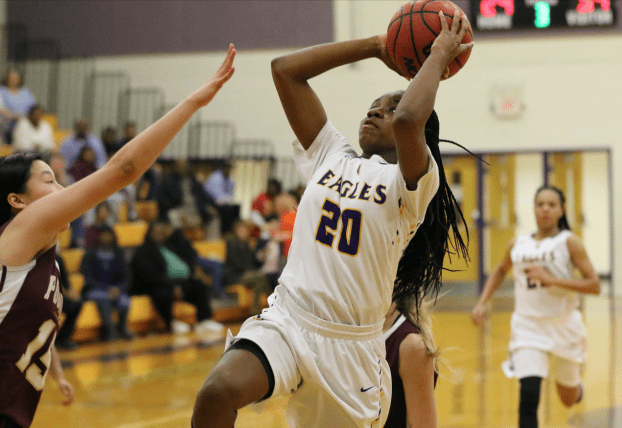 Prince Edward County High School sophomore Ke'Mya Rux ascends while aiming for more points against visiting Poquoson High School in Friday night's Region 2A tournament championship game. The No. 1 Lady Eagles fought hard but fell 57-49 to the No. 2 Islanders. Both teams had already clinched spots in the upcoming state tournament and will begin play next week. (Photo by Titus Mohler)

On Friday, the Islanders started strong and held the lead for the vast majority of the game, but Prince Edward put together runs to give itself a chance at claiming the win.

Lady Eagles Head Coach Carlton Redd was pleased with how his players performed.

“All I asked them to do was make sure when we go home that we don’t look back and say, ‘Well, we could have done this,’ or ‘I should have done this,’” he said. “No — they gave me everything they had. They played tough. We played very well. This loss doesn’t waver my confidence going to the next step.”

The Islanders led 16-11 after the first quarter and 34-22 at the half, but in the third quarter, Prince Edward orchestrated its biggest run of the game, a 16-4 spurt that had junior Da’Mya Harris and senior Ka’Deshia Wright among its key architects. It was a layup from Harris that tied the game 38-38, causing the home crowd to erupt in excitement.

Poquoson was able to open up another lead, but the Lady Eagles pushed back again, narrowing the Islanders’ advantage to 43-41 at the end of the period.

Prince Edward came within one during the fourth quarter, making it 45-44 early on, but the Islanders were able to stay out in front.

A big challenge that the Lady Eagles had to contend with Friday was the one posed by Poquoson senior Sondra Fan.

“As far as any individual player, she’s the best we’ve faced,” Redd said.

He praised her three-point shooting ability. Also remarkable was her skill of getting to the rim and finishing.

“She’s a good ballplayer, good fundamentals,” Redd said. “She reads the defense. That’s just instinct. … From what we had been reading on her, we knew she was going to get hers. She was as good as advertised.”

Fan finished with a game-high 35 points.

“Our thing was to keep everybody else from scoring, and they didn’t do that bad,” Redd said of his players. “… They did what I asked them to do.”

He complimented Poquoson’s defensive effort, which made Harris work hard on offense. This came in addition to the hard work she was already involved in on defense trying to contain Fan.

Harris led her team with 17 points, Wright had 13 points and sophomore Ke’Mya Rux continued to shine in the postseason, adding 10.

Poquoson Head Coach Page Yarbrough said it has been awhile since the Islanders have won a regional title, adding to the sweetness of the accomplishment.

“It means a lot,” she said. “Our kids have truly worked hard, and they deserve it. … And I’m a hard coach, and I’m hard on them, and they produced tonight. So, I couldn’t be more proud of my kids.”

The Lady Eagles and Islanders could meet again in the state semifinals if both squads advance past the quarterfinal round.