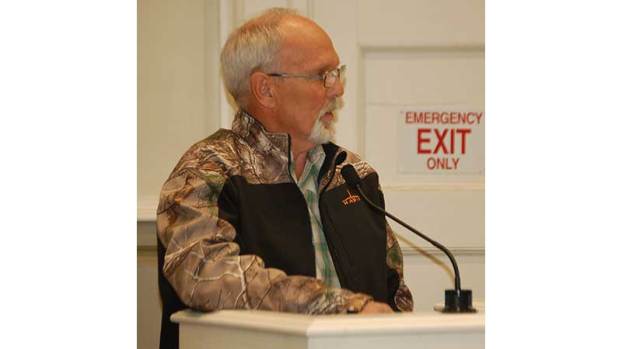 Eddie Slagle addressed members of the Cumberland County Board of Supervisors on Tuesday during a public hearing. (Photo by Emily Hollingsworth)

Members of the Cumberland County Board of Supervisors voted unanimously in favor of a temporary construction yard for the Atlantic Coast Pipeline (ACP) on Tuesday evening.

The yard, estimated to use 75 acres out of a 337-acre lot, will store equipment and material that will be transported to a nearby construction site for the pipeline.

Members of the Cumberland County Planning Commission voted in January to approve a recommendation for the conditional use permit to the board of supervisors.

Four members of the public spoke Tuesday regarding the construction yard, citing concerns related to traffic from the construction vehicles, road conditions along Routes 45 and 60 and environmental consequences.

Eddie Slagle, who lives at the corner of Salem Church Road and Back Mountain Road, less than a mile from the site of the construction yard, said the presence of 20-30 work vehicles and more than 600 employees who would be at the ACP site would make a marked difference in the county.

“My concern is how the site could negatively affect Cumberland and Buckingham roads, safety of citizens, school buses, erosion control and other environmental issues,” Slagle said.

He noted a Virginia Department of Transportation (VDOT) report in the meeting board packet concerning the number of workers who would be leaving the construction yard site during its peak hours, which would include approximately 610 employees.

County Administrator and Attorney Vivian Seay Giles said that an additional condition, condition No. 3, was added after receiving traffic data from VDOT.

The condition would assign personnel who would direct traffic during peak times of the ACP’s operations, with the county reserving the right to monitor traffic activity.

“Our consultant did recommend the addition of condition No. 3,” Giles said. “I am told that Dominon has no objection to that condition.”

“For all material being brought to the site, the route to be used shall be Route 45 to Salem Church Road, rather than from another direction,” the condition cited. “When materials are leaving the subject property to be deployed, the shortest route to the work location may be used.”

Ingle cited that members of the Buckingham board asked that the Cumberland board place conditions that would reroute traffic away from Salem Church Road.

Giles noted that an alternative route may cause safety concerns.

“If you were to do this and send traffic to Route 45, you would be adding at least a minimum of two left-hand turns, and those are always the less safe of the turns. Because they would be going to Buckingham, they would be turning left twice,” Giles said.

“Staff, having evaluated this and having looked at the bus routes and just having evaluated the totality of the circumstances, did not recommend changing item No. (6),” Giles said, noting that the evaluation cited low-traffic counts on that route.

“I know it would be a little inconvenient for them to come back to (Route) 45 and go back up to (Route) 60,” Wheeler said about that particular route versus Salem Church Road. “But I’ve driven those roads, I’ve driven through there … they’re not the straightest roads.”

“That was something that was brought up to the planning commission too,” said ACP Project Manager Greg Supey, who noted that the company was willing to make adjustments to the routes for the heavier trucks.

He said the Cumberland construction yard would not be a pipe yard, meaning that trucks would not be transporting pipes to and from the site.

Board members voted to approve an amendment to condition No. 6 that would limit travel along the shortest route from the construction yard to the Buckingham site to vehicles fewer than five axles.

ACP Project Manager Ron Baker, in a previous Herald report, cited that peak construction on the ACP site would take place from April to November.

Members of the Cumberland County Board of Supervisors will hold a public hearing Tuesday to receive input from residents about... read more