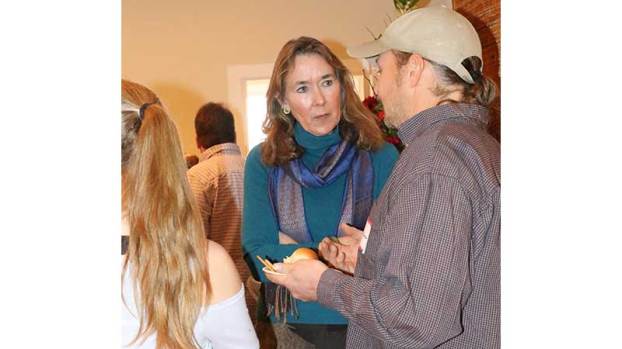 Leslie Cockburn, who is running for Virginia’s 5th Congressional District seat, held an event at Ellis Acres Memorial Park in Dillwyn on Saturday afternoon, sharing the priorities of her campaign while also inviting input from the people of Buckingham County.

After an informal meet and greet, she was formally introduced and gave a speech to a group of approximately 40 people.

“Buckingham is a beautiful county,” Cockburn said in a brief interview during the meet-and-greet portion of the event. “Buckingham is full of great, interesting people. As I say, Buckingham’s not so different from my county, Rappahannock. They’re very similar. So, I feel at home here.”

As described on her website, LeslieCockburnforCongress.com, Cockburn is a graduate of Yale University and had a distinguished career in journalism that spanned 35 years.

“A producer for CBS News’ ‘60 Minutes,’ a correspondent for PBS’s ‘Frontline,’ a Ferris Professor of Journalism at Princeton, a writer and author, Leslie has won two Emmys, two George Polk awards, two Columbia Dupont journalism awards and the Robert F. Kennedy Award,” her campaign website notes. “She has covered the major issues of our time, from the financial meltdown to nuclear weapons, from radical jihad to the drug cartels. She covered the wars in Afghanistan, Iraq, Somalia, Colombia, Cambodia and Central America.”

The website details that Cockburn and her husband, Andrew, bought their farm in Rappahannock County in 1999.

Near the beginning of her speech Saturday, she noted her original plans of getting into farming and gardening and more at her Rappahannock farm after leaving behind her career in journalism.

“And then suddenly there’s Donald Trump,” she said, referring to the 2016 U.S. presidential election result. “And … although it’s very unusual for a journalist to jump over the wall in politics, I felt that anyone with the kind of skills that I’ve built up over the years should step up …”

As a Democrat, she will be looking to unseat U.S. Rep. Tom Garrett, R-Buckingham, who was elected to represent Virginia’s 5th District in November 2016.

In the brief interview during Saturday’s meet and greet, she shared her thoughts on ways to help Buckingham. First, she spoke against the approved 53,783-horsepower Atlantic Coast Pipeline compressor station slated to be built in the Union Hill community.

“We should not have a huge and dangerous compressor station from the pipeline right in the middle of that community,” she said. “That needs to be stopped at a federal level. A congressperson could do something about that.”

Second, she said that Buckingham, like the rest of the rural counties, including Rappahannock, has big education issues.

Third, she advocated for a greater financial priority being put upon conservation.

Lastly, she said, “My biggest issue of all is health care, because that’s what everyone cares so much about right now. So, anything that we can do to put the Affordable Care Act back in place and go further in the other direction heading toward Medicare for all — that would be a big help to this county.”

Members of the Farmville community spent Valentine’s Day morning seeking to learn more about their heart health during a community... read more