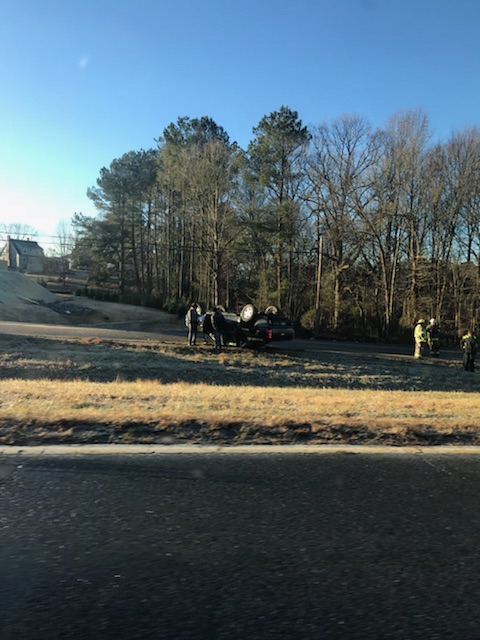 Slick roads in Prince Edward County have led to multiple accidents. Pictured is an accident at Gully Tavern intersection at U.S. Route 460, close to 307.

A representative of the Virginia Department of Transportation (VDOT) has discussed actions taken by the organization to improve roads in the Heart of Virginia from the icy conditions and urged caution for motorists on the road today, particularly as numerous vehicle accidents have taken place in the area.

Spokeswoman Paula Jones with VDOT said the organization has received reports from the Heart of Virginia about road conditions.

“Crews have been out,” Jones said. “They did apply pre-treatment on major roadways over the last several days and main areas starting over the weekend. They have been applying abrasives and salt and sand as appropriate in trouble areas. So if things have been reported, we have been addressing them, and we have been monitoring conditions.”

Jones said while weather is set to be warmer today, road temperatures are often colder than air temperatures.

She urged motorists to be careful to drive safely to avoid vehicle accidents.

“If people have to be on the roadway today, certainly allowing extra time this morning before getting on the roadway,” Jones said. “If you must be out, use extreme caution, travel slowly. Make very steady turns, don’t turn abruptly. The biggest thing with these icy conditions, it’s not a matter of getting going, it’s a matter of stopping. So allow extra time between yourself and other vehicles if you must travel.”

Icy conditions throughout the Heart of Virginia have prompted closures in area schools and organizations in Prince Edward, Cumberland and Buckingham.

“With a 2 hour delay, some buses begin routes at 8:00 a.m.,” the post cited. “We were hoping that temperatures and roads would be in a better place by now; however, that is not the case. Please be safe. Thankfully, we will experience a heat wave this afternoon!”

A brush fire was contained in a wooded area behind residences near the intersection of Milnwood Road and Price Drive... read more