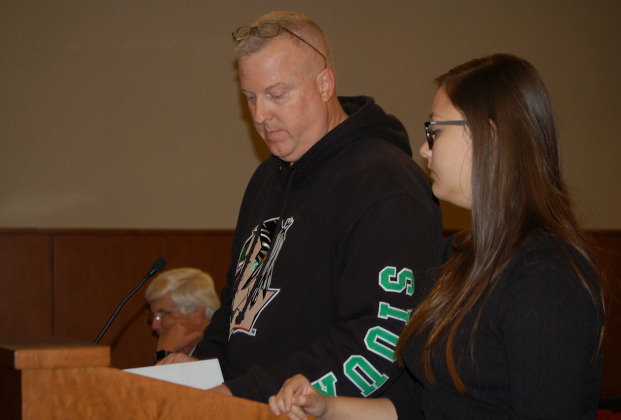 Timothy and Crystal Fanter said they were not notified of a proposal for a telecommunications tower to be built near their family’s property. (Photo by Emily Hollingsworth)

A family in Buckingham County said it was not properly notified of a potential telecommunications tower proposed to be built near their property. The family’s statement came during a Dec. 18 Buckingham County Planning Commission meeting.

Timothy Fanter, of Buckingham, and his daughter, Crystal, each spoke for three minutes during the meeting, detailing concerns that they were not properly notified of the proposed telecommunications tower, which would be built adjacent to their property, the family cited.

Timothy said Zoning and Planning Administrator Rebecca Cobb had made copies of the information regarding the telecommunications tower following a meeting between the two of them.

“I have issues with every page here,” Timothy said. “The big issue is I was never properly notified.”

Applicants of a nearly 200-foot telecommunications tower — Drew Patterson, at Shenandoah Mobile, LLC, of Shentel, and owner Jenny Kidd Ledford, of Mocksville, North Carolina — are requesting that the tower be located on South James River Highway on Route 56 in the James River Magisterial District.

The application requests a special use permit for the purpose of constructing a monopole telecommunications tower.

The tower would be on a parcel of approximately 45 acres, according to the meeting packet.

“In 2008, Verizon was approved for a 310(-foot) lattice communications tower. However, the tower was never constructed, and that permit is now null and void,” the meeting packet cited. “Shentel has made application for a monopole telecommunications tower for the purpose of continuing to build out their network in Buckingham County.”

According to the meeting packet, CityScape Consultants, based in Boca Raton, Florida, had reviewed the application and provided a letter of review and proposed conditions.

The planning commission listed 15 conditions for the proposed telecommunications tower, including that all feed cables would be hidden within the tower, that all access ports shall be
sealed to prevent wildlife intrusion, that the emergency backup generator would not exceed 65 (A-weighted decibels) dBa at the nearest property edge with testing limited to between 9 a.m. and 4 p.m., that all federal, state and local regulations, ordinances and laws be adhered to in building and maintaining the tower and that the county zoning administrator and one other county staff member would be allowed to enter the property at any time to check for compliance.

Timothy said that several meetings had taken place concerning the tower before he and his family were notified by the company or county.

“Granted, I have only been here a year,” Timothy said. “I moved in Christmas Eve last year. But I believe I’ve had three times that we’ve paid our property tax.”

He said a former resident of the property had been receiving notices but had forwarded him documentation about the tower and the Dec. 19 public hearing on Dec. 9.

That Monday, Dec. 12, Timothy said he received photocopies of other documentation after meeting with Cobb.

“I know through reading through this 14-page document, it looks like you’ve had a number of meetings before. You’ve had a balloon test to where they actually had to notify somebody on the property to take pictures of the balloon,” Timothy said. “We’ve missed out on every one of these.”

“I cannot speak what the breakdown of communication was. Like I’ve said, I’ve been here for almost a year, but apparently you’ve been sending them to Brenda Kidd,” Timothy said, referring to the former resident.

Timothy, in a phone interview last Tuesday afternoon, said a representative and attorney with Shentel had spoken with him after the meeting.

“They were as surprised as everyone else,” said Timothy, who noted the representatives had sent him additional documentation about the property following his comments to the planning commission.

Timothy, during the Dec. 19 meeting, also discussed a potential devaluation of property that could result from the tower.

“You’re going to say it’s in the hands of the assessor in this office,” Timothy said about the property value. “When I retired from the military and wanted a Junior ROTC, I had 200 (options) to choose from. I chose this place. And of course, the house is awesome. My wife fell in love with it. But if you were … any kind of appraiser, you know and you can ask them, you can ask any realtor, it’s going to devaluate the property.”

Board of Supervisors Representative Danny Allen asked Timothy during the meeting if the tower was set to be built on the family’s property. Timothy said the tower would be built adjacent to the property.

Cobb said in an email interview last Wednesday that the tower is proposed to be in close proximity to the Fanters’ property.

“Mr. Fanter’s home is approximately 700 feet away from the proposed tower,” Cobb said.

Describing what may have caused the incident, Cobb said property records often take time — sometimes up to a year — to be updated.

“He purchased the property about a year ago, but property records are not updated immediately and most times are updated annually,” Cobb said. “All the information I had showed the previous owner, so the public hearing notification was mailed to the previous owner, and they forwarded to Mr. Fanter. I now have his mailing information and will be sending him any further public hearing notifications.”

Crystal, a law student attending Roger Williams University School of Law in Rhode Island, also spoke during the meeting, saying that the company had not notified her family.

“I was never given an affidavit from Shentel’s engineer,” Crystal said. “One of the most important ones of mine … I know Ms. Cobb has made a remark that you can’t argue about safety issues and one of (the pieces of paperwork) here … it says that Shentel did, by my knowledge, have all the proper protocol and followed the (Federal Communications Commission) FCC regulations for safety in regards to radiation, and that was enclosed in the packet, but I’ve never seen any of that information. So how would I know if I’m going to go by somebody’s word by that? It’s just not fair to us that we were never given proper time to be able to review all of this documentation.”

“Shentel said they had requested access to go onto our property,” Crystal said. “We never got a notice. We never got a letter, so if they did request access from us, and they went onto our property without our permission, what else can you guys do? If you guys built that … tower, then what’s going to stop you from building something else?”

Crystal noted that the tower may not benefit the county.

“There’s an argument in here saying that if they were going to build a Shentel … tower, that was going to help supporting existing businesses or students with their homework,” Crystal said. “It’s Buckingham. I don’t see any businesses around. The reason why we picked this property was because it’s rural. It’s not where I’m from, like New York, Rhode Island area; it’s the reason why we picked this place.”

Timothy said he is not optimistic that his statement will affect the decision about the tower going forward.

“I will go to express my concern again, and I’m sure it’s going to fall on deaf ears,” Timothy said in the phone interview.

Charles White, Buckingham County Historian and Owner and Operator of The Informant, an African-American newspaper, recently published a revised and... read more