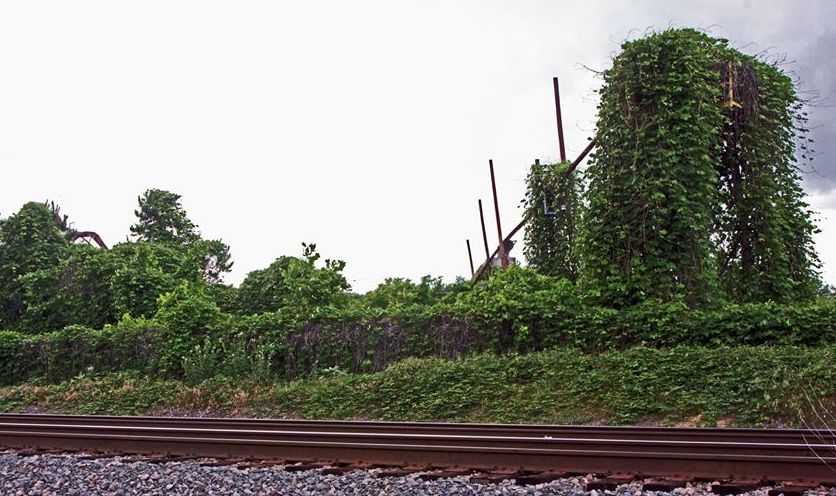 Kudzu is the stuff of Southern gothic nightmares; it’s bad, but not as bad as its reputation.

Just like people, plants manage to slip into our country uninvited; they hitchhike in packing materials or grain, for example. Some are well behaved and some cause major harm. Other plants are officially invited to live here and arrive with lots of fanfare. They may be touted as the next best garden plant or expected to perform some beneficial function, such as erosion control. Tulips and wheat are non-native plants that were deliberately brought here and that have contributed to the common good. It’s easy to forget that they aren’t natives. Even though kudzu didn’t really eat the South, it’s a classic example of an introduced plant that had unintentional consequences. Displayed as a novelty plant at the Philadelphia Centennial Exposition in 1876, it became popular with home gardeners. What’s not to like about a vine with purple flowers that smell like grape soda. Kudzu was later promoted to farmers as an effective tool for control of erosion, but it had unexpected consequences; it just grew and grew.

The Virginia Department of Conservation and Recreation (DCR) maintains a list of invasive plants, serious thugs that pose threats to our ecosystem. They are non-natives that grow and mature quickly; produce lots of seeds that have a high germination rate; colonize quickly and outcompete natives; and are expensive and difficult to eradicate. Japanese honeysuckle, garlic mustard, multiflora rose, Japanese stiltgrass, Chinese privet, and tree of heaven are highly invasive and common throughout our area.

The DCR also keeps a list of species that may not be well established here, but that have the potential to become problematic because growing conditions here are similar to those in other areas where these plants have become invasive. This list currently includes beach vitex (Vitex rotundifolia); cogon grass (Imperata cylindrica); common primrose willow (Ludwigia grandiflora); giant hogweed (Heracleum mantegazzianum); giant salvinia (Salvinia molesta); tropical soda apple (Solanum viarum); water hyacinth (Eichhornia crassipes); water spinach (Ipomea aquatica); and wavyleaf grass (Oplismenus undulatifolius). With the exception of giant hogweed, tropical soda apple, and water spinach, all of these plants have been found somewhere in Virginia. Wavyleaf grass has the potential to be far more problematic than Japanese stiltgrass. Giant hogweed hasn’t been found here yet, but is on the federal list of noxious weeds and is capable of causing skin irritation, blistering, and even blindness.

There is abundant information online about all of these plants. See: http://www.dcr.virginia.gov/natural-heritage/invsppdflist for photos and details.

If you think that you’ve found one of these plants, please report it. These plants are thugs, not good citizens.

CYNTHIA WOOD is a master gardener. She can be reached at cynthia.crewe23930@gmail.com.

In my father’s time