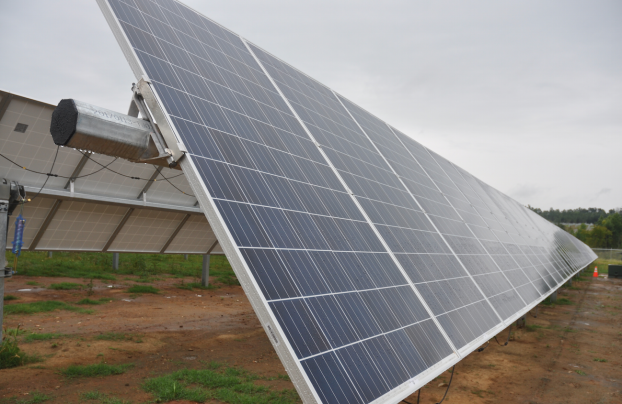 Representatives of Buckingham II Solar are seeking input from members of the community about a second solar farm project approved by the Buckingham County Board of Supervisors in August.

Solar facility to be discussed

A company set to build a solar renewable energy project is searching for input from members of the Buckingham community and those who live close to the proposed site.

According to a public notice by representatives of Buckingham II Solar LLC, the representatives will hold a 30-day comment period between Jan. 11 and Feb. 10 for residents to contact them by mailing address, phone and email.

A public meeting will also be held Feb. 1 at the Buckingham Agricultural Resource Network (BARN) from 6:15- 6:45 p.m. or until all questions have been answered, according to the notice.

Supervisors in Buckingham County unanimously granted a special use permit (SUP) for the facility during their Aug. 14 meeting, allowing the construction of a $35 million solar facility, consisting of a 20-megawatt solar photovoltaic (PV) electricity-generating facility that could power about 3,300 homes and potentially create 13 new jobs in the county.

The solar project is set to be built on 295 acres across five parcels at the intersection of High Rock Road and Highway 60, according to the public notice.

Owners of the properties that the facility span include Robert and Lilian Johansen, Katherine J. Firestone Living Trust, Ryan D. Johnson and Blue Rock Resources, according to a previous Herald report.

This is the second solar facility located in Buckingham County. Last June, county supervisors approved a special use permit for the construction of a $35 million solar energy facility at 623 High Rock Road in Buckingham. Virginia Solar LLC, which owns Buckingham II Solar, the permit applicant, sought last year’s permit for the first facility.

“This particular public participation is offered for the following purpose,” officials of the Buckingham II Solar public notice cited. “Acquaint the public with the technical aspects of the proposed project and how the standards and the requirements of chapter 9VAC 15-60 ‘Small Renewable Energy Projects (Solar) Permit By Rule’ will be met.”

Chapter 9VAC 15-60 refers to the Virginia codes that detail regulations that the Buckingham solar project would fall under.

Representatives in the notice cite that the request for public input would also “identify any issues of concern, facilitate communication and establish a dialogue between Virginia Solar LLC and persons who may be affected by the project.”

The permit approved by the Buckingham Board of Supervisors includes 26 conditions which address compliance with federal, local and state laws, including meeting national standards and requirements; a building permit being obtained within three years of obtaining the permit; noise during construction and operation of the facility; a minimum of a 150-foot setback between solar equipment and residences; a minimum 50-foot setback from solar equipment to the property line and any public right of ways where it is adjacent to property not owned by the same property owner; vegetative buffers; a six-foot security fence around the facility; construction lighting; parking and panels having anti-reflective coatings.

Members of the public during the August meeting also commented on the impact of the facility. “I’ve driven by there. I’ve looked at it. I approve it. Let’s go renewable and stop digging fossil fuel out of the ground,” resident Nelson Bailey said during the public hearing that preceded supervisors’ approval of the project.

“My property borders it to the north. I have concerns about the security fencing to at least be six-foot tall surrounding the project. I believe it would be an eyesore … I also believe it will reduce the resale value of adjoining properties like mine.”

The public notice cites that the project is currently proceeding through the Virginia Permit by Rule process, which is developed by the Virginia Department of Environmental Quality.

Those interested in contacting Buckingham II Solar LLC Representative Matthew Meares, cited in the public notice, can reach him at 8401 Patterson Ave., Suite 201, Richmond, VA, 23229. Meares can also be contacted at Matthew. meares@vasolarllc.com or (919) 807-1873.

Little Caesars is set to open in January, according to Patrick O’Connell, owner of Aces LLC — a Little Caesars... read more