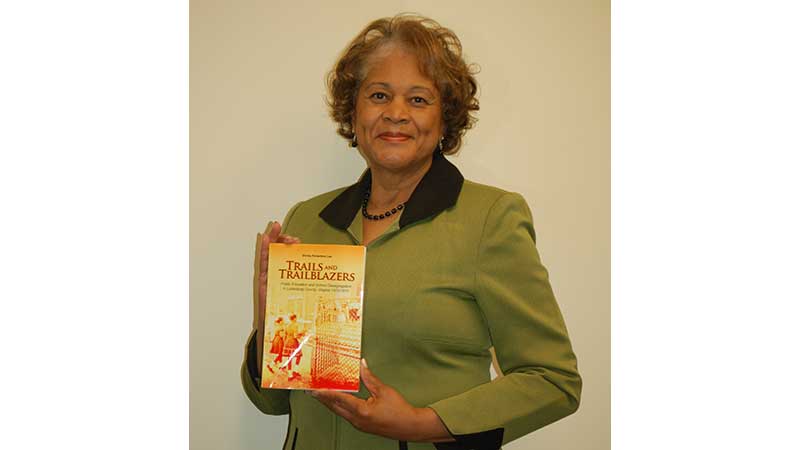 Shirley Robertson Lee, an educator for more than 30 years in the area, recently published “Trails and Trailblazers,” which explores the process of segregation and integration of public schools in Lunenburg County. (Photo by Emily Hollingsworth)

Shirley Robertson Lee, of Lunenburg, has brought a critical aspect of the history of her hometown to a new generation of readers and researchers.

Lee published “Trails and Trailblazers: Public Education and School Desegregation in Lunenburg County” in December. The book was published in December by Dorrance Publishing Co. based in Pennsylvania.

Lee currently works as coordinator with the Longwood University Speech, Hearing and Learning Services (SHLS) tutoring program and had served as elementary assistant principal with the Prince Edward County Board of Education for 30 years before retiring in 2008.

“Trails and Trailblazers” is available at the Barnes and Noble website and Amazon.com.

Lee said she was first inspired to work on the book at her 40th class reunion in 2010 at Lunenburg’s Central High School, where Lee graduated in the class of 1970. The 1970 class was a unique class for Lee and her classmates, as it was the first fully-integrated graduating class of the school’s history.

She said the reunion, her classmates’ discussions and her questions regarding what forces were in play that influenced the segregation and desegregation of the area school system were what inspired her to pursue the book.

The book explores education in Lunenburg from 1870 to 1970. Lee, in the preface to “Trails and Trailblazers,” describes the book as a historical narrative that aims to piece together the century of the school system’s history through historical documents and personal interviews from people in the county and throughout the commonwealth.

“The work aimed to convey a sense of another time and place while providing an understanding of why and how certain events occurred,” Lee wrote in the preface.

Lee also wrote in the preface that she interviewed an estimated 150 people, from civic leaders, former and current school employees and members of the community.

Lee said the only extensive study regarding Lunenburg’s education history was written by Oscar Wood, who published “Development of Education for Negros in Lunenburg County, Virginia 1870-1952.”

The history’s impact on those who lived through it is expressed in a chapter of Lee’s book called, “In Their Own Words.”

A chapter, “A Done Deal,” recounts a Lunenburg board of supervisors member who was present in the courtroom when Judge Robert Merhige decided in favor of full desegregation for Virginia’s schools.

Lee said the publication will allow future researchers and students, including her own children, to have a comprehensive record of the county’s educational history, to have its history in one place when it had initially been spread throughout the state.