She was born Feb. 25, 1930 in Pulaski, Virginia to Edward Early and Lucille Ferguson Sutphin. 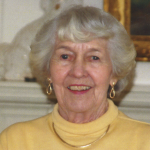 Iris married into a weekly newspaper family and provided behind the scene support and insight not only to her husband but to her father in law, J B Wall, and both her sons as well. She did not write the news – she made sure the editor and publisher got the paper to press.

She attended dozens of meetings of the Virginia Press Association over the decades and she was involved in the launching of radio station WVHL-FM in 1997.

She is survived by her husband of sixty-six years, William Bidgood Wall and her sons, William Bidgood Wall, Jr., and wife Staci of Sebring, Florida and Steven E. Wall and wife Cathy of Farmville; a sister, Jean Yates of Pulaski; four grandchildren, Leila Caroline of Portland, Oregon, Mary Emiline and husband Sven Herman of Fort Myers, Florida, Elizabeth Peyton Langhorne and William Bidgood “Guy” III, both of Farmville. She is also survived by a number of nieces, nephews and cousins.She was a member of Johns Memorial Episcopal Church.

Iris was a 1951 graduate of Longwood College and a member of Alpha Sigma Alpha sorority. She enjoyed gardening, playing bridge, tennis,art, animals and antiques. She was an excellent cook and hostess, and was also a member of the Thursday Book Club.

There will be a visitation at 1 p.m. and Memorial service at 2 p.m. on Thursday Jan. 4, at Puckett Funeral Home in Farmville.

In lieu of flowers, please consider a memorial contribution to the Prince Edward County Rescue Squad.

A special thanks to family friend an physician Kwabena A. Donkor and to the staff at the Watson Assisted Living Unit of The Woodland and to Centra Hospice.