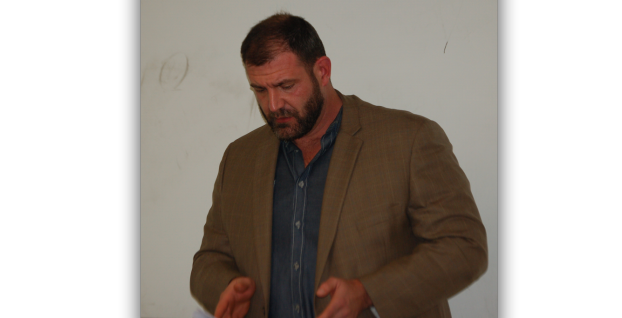 Members of the Cumberland County Planning Commission voted unanimously to recommend a Conditional Use Permit (CUP) Jan. 8 to the Board of Supervisors for a temporary construction yard for the Atlantic Coast Pipeline (ACP) on Salem Church Road following a public hearing where three provided public comment.

At one point during the meeting, approximately 40 people were present in the room, with some standing in the back row as chairs had been filled.

“The intended use is a temporary yard for storage of equipment and material for the Atlantic Coast Pipeline,” the board packet cited about the property, which would use 75 acres out of a 337-acre lot.

Planning and Zoning Director Sara Carter said the ACP had considered four locations in the county, and they and county administration had seen the Salem Church location as the most ideal.

“Dominion Virginia Power looked at several sites in Cumberland County,” Carter said. “I think we talked about four different ones at different time. This actually from a staff point of view was our first choice of a site that we were hoping they would pick. It has good site distance along Salem Church. Salem Church is a road that does have industrial zoning at both ends, so it’s a little bit more consistent with what is on that road than some of the other sites.”

Staff recommended six conditions according to the board packet, including a designated route, where all material brought to the site would need to be brought through Route 45 to Salem Church Road, compliance with Virginia Department of Transportation (VDOT), septic, well and electrical connections and a set timeframe for the permit, that the permit would “be valid from the time of approval through December 31, 2021.”

The ACP natural gas project is 600 miles and will start in West Virginia, travel through Virginia and end in North Carolina. A 42-inch pipeline would span Buckingham County, and cross Cumberland and Prince Edward counties. The project has been hotly contested in Buckingham County. In January, county supervisors in Buckingham approved a special use permit for a 53,783-horsepower compressor station, slated to be constructed between Shelton Store and Union Hill Roads on Route 56.

In a presentation, Ron Baker, project manager with the ACP, said this portion of the pipeline that would use the construction yard stretches 59 miles, from Route 626 in Nelson County and will extend south to Route 607.

“It’s slated for 2018 construction,” Baker said. “Peak use of this yard would be from April to November of 2018. The new yard will be incorporated into the (Federal Energy Regulatory Commission) FERC filing.”

Baker cited the location’s proximity to the worksite without using many public roads, the lack of nearby residents and close proximity to amenities such as restaurants or hotels, citing Farmville as an example, as reasons for choosing the site.

Three members of the public had spoken during the meeting, one by email and two in person.

Heidi Dhivya Berthoud, of the Friends of Buckingham, cited that a public hearing in Augusta County for a similar request had been postponed.

Berthoud asked about potential drawbacks to the construction yard.

“What roads will these heavy trucks use in Cumberland? What impact will there be to bridges? The county will bear the burden of repairs,” Berthoud said in an email, which Carter read aloud during the meeting. “What about the dangers of heavy trucks encountering school buses?”

“We hope that you will partner with the citizens of Cumberland, your Board of Supervisors to find a plan that protects the health, safety and welfare of all citizens and your land, water and air,” Berthoud said.

Eddie Slagle, who lives on the Cumberland-Buckingham county line, said the area currently has a large number of industrial trucks that pass through.

“This road is too narrow for the current traffic,” Slagle said, who said that he had spoken with Resident Engineer Scot Shippee about the current road conditions. “There’s also a safety issue with school buses, no shoulders on these roads and in some cases, abrupt drop-offs. If you’re considering approval and passing this along to the Board of Supervisors, I would request you include conditions limiting the access to the property owner from Route 45 and not add any additional burden to the secondary roads in Cumberland and Buckingham.”

Jim Tillett, who lives on Salem Church Road and has a shared driveway with American Timberland, asked questions regarding the construction and noted a potential issue with his driveway.

“A comment made by Mr. Baker about a minute ago about the large rocks on the driveway, well we apparently, we’re going to share that driveway as it is part my driveway and part their driveway,” Tillett said. “I wouldn’t want big rocks on the end of my driveway either.”

During the hearing, Baker and Tillett reviewed a map of the proposed ACP site, where they determined that the ACP yard would have a driveway separate from Tillett’s.

Baker said there would be some piping at the site that would be transported to the construction site.

Commission Chairman Dr. Will Burger asked Baker about the number of trucks that would head to and from the construction site.

“How many trucks a day are you anticipating?” Burger said.

Baker said the number of trucks, which do not include pickup trucks, would equal approximately 22 each day, with a potential for 10-12 lowboy trucks, noting that activity would dip and surge.

“I just wanted to clear up a misconception that this yard is going to have these constant trips of gianantic vehicles. 99.5 percent of the traffic that comes out of that yard is going to be pickup trucks,” Baker said. “Large, heavy-haul type (trucks) will be under heavy-haul permits, so they would come with, based on the road, flaggers, pilot vehicles, all of that sort of thing.”

Baker said during the presentation that officials with ACP have discussed the site with VDOT, but have not made any contracts in writing for approval.

“All indication is we have appropriate site distance for public safety and use of the entrance off of the main road,” Baker said.

“We are currently developing a contract with ACP and VDOT,” Carrie Shepheard, assistant resident engineer, said. “It’s not signed yet, but the last that I saw, there was going to be some sort of video footage of the roads prior to them moving in and then after, so that they can address any deficiencies that happen throughout the construction.”

“I know the entranceway will be taken care of based off of VDOT requirements,” Donahue said. “I’m concerned about the actual roadway. If there are buses going past another vehicle, is it wide enough for both of those to go at the speed limit and pass?”

Shepheard said while VDOT could not widen the roadway before the construction yard could set up shop, she said they could provide an offset to help the vehicles move on and off the road without going into the other lane.

“Nobody wants things of this nature in their neighborhood, but this is probably the best location,” District Four Commissioner Hubert Allen said, who noted that the yard is in his district. “As far as economic development, the impact is not just for the county in Cumberland, but for the entire commonwealth of Virginia and basically the southeastern half of the U.S., or section of the U.S.”

Commission members decided to approve a recommendation to the Board of Supervisors. Members also voted unanimously to approve a condition that the permit would not be approved until a contract between ACP and VDOT has been signed, a subsidiary motion that the hours of operations return to the applicant’s request of 6 a.m. to 9 p.m. and a request that Cumberland County staff work with Virginia State Police to enforce Motor Carrier Safety on Salem Church Road.

Members of the Cumberland County Board of Supervisors, during its Tuesday meeting, scheduled the public hearing during its meeting on Feb. 13.

ACP yard to be discussed

By Emily Hollingsworth and Morgan White The Farmville Herald Members of the Cumberland County Planning Commission will hold a public... read more