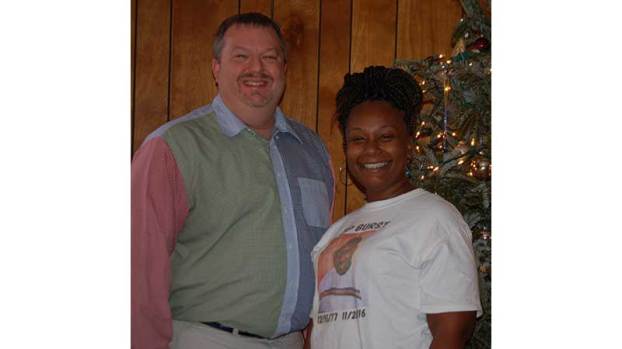 Taquita Wilkins, right, and her family moved into a home in Rice following a fire that destroyed their home Dec. 6. Wilkins worked with Randy Jenkins, left, who oversees the development of the Virginia Homeless Solutions Program at STEPS. He helped her and her family move into the home through STEPS’ Rapid Rehousing program.

Members of the Wilkins family have found a new home after a fire destroyed theirs earlier this month.

Taquita Wilkins and her three children were displaced Dec. 6 after a fire destroyed their home at 6543 Patrick Henry Highway.

Wilkins was encouraged to contact STEPS, Inc., a nonprofit in Prince Edward County, by a relative.

Wilkins said she had called the organization on a Friday to make an appointment.

“I went in on a Monday, and Tuesday I was moving in,” Wilkins said.

“It was wonderful,” Wilkins said.

Wilkins was eligible for a program called Rapid Rehousing, a program offered by STEPS that seeks to rehouse families or individuals who have become homeless and need immediate assistance.

Amy Beatson, director of planning and resource development with STEPS, said the organization has offered the program for several years through a Virginia Homeless Solutions Program grant from the Department of Housing and Community Development.

She said the program enables people who are homeless to have a place to go.

“When somebody is in a shelter situation, displaced for whatever reason, they’re extremely vulnerable,” Beatson said, describing the idea behind Rapid Rehousing. “So that funding stream allows us to rehouse them rapidly.”

Beatson said they also worked closely with representatives from the American Red Cross to help Wilkins and her family.

Beatson said Wilkins signed a lease to be rehoused on Dec. 11.

Randy Jenkins, who oversees the development of the Virginia Homeless Solutions Program at STEPS, said the program provides solutions to multiple causes of homelessness.

“We provide homeless prevention services, which is your typical rental assistance for people who are facing eviction by court action,” Jenkins said. “We also provide shelter services as well as rehousing services.”

“Ms. Wilkins came in as a Rapid Rehousing client to be sheltered through the Red Cross,” Jenkins said. “And we were able to provide funding assistance for security deposits for a month’s rent to have her rehoused into a new location.”

Jenkins said that they work with area real estate agencies through the Rapid Rehousing program to find houses that people can move into.

Wilkins said the house has been a peaceful transition place for her and her family.

“Everything’s coming together,” she said. “They love the new place.”

They could also stop by during STEPS office hours Monday-Friday, 8 a.m.-4:30 p.m.

Provided that the governing bodies of all member counties give their approval, the Commonwealth Regional Council (CRC) will raise annual... read more