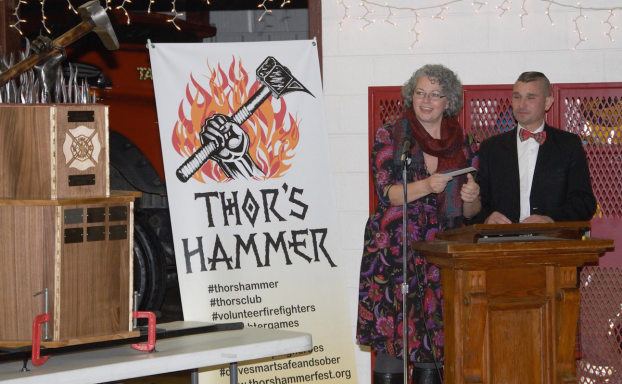 Cassandra Stish, founder of the event and mother of Thurston “Thor” Stish, presented a check for $3,700 to the Dillwyn Volunteer Fire Department (VFD) during the department’s Christmas dinner on Saturday, Dec. 16.

Dillwyn VFD was the winner of the firefighter competition held during Thor’s Hammer, which also included a chili cook-off.

Stish, during the Sept. 30 event, said it honored the work of her son and others in area fire departments.

“It is an extension of his life and the way he lived,” she said about Thor’s impact. “It made sense to do something to benefit something he loved.”

“You all are truly heroes,” Stish said during the event, addressing area firefighters. “We couldn’t think of anything better to honor him,” she said.

Thor, 19, died on New Year’s Eve in 2015 in a vehicle accident on Woodland Church Road in Yogaville — only a few miles from his home.

George Stish said in a phone interview Friday that he has been amazed at the responses from the different departments and noted that efforts were made to deliver each check to them before the holidays.

“Each fire department that we’ve gone to and presented the checks, they’ve been more than happy, ecstatic to get that and to have been involved in the event,” he said of Thor’s Hammer.

“The focus is to benefit the fire departments here in Buckingham County,” George said.

George said he and Cassandra are looking to hold the event again next year and that people could expect some changes.

George said Thor’s effect on the county and its residents was the driving force behind the event and the overwhelming support it has gotten.

George also said he has received comments from firefighters and members of the community about how much camaraderie they were able to experience with each other.

“It’s a common ground where they all come together, and we have fun,” George said. “That’s one of the biggest things that I have heard since the event was that these firefighters, the chili cook-off people, the people who attended, they had fun. They laughed, they talked to people, they had a sense of community — that was the core of this event.”

He said he hopes that the event, in addition to bringing awareness to area fire departments, would also encourage members of the community to pursue being a volunteer firefighter.

“We need these young people to step up (and) say, ‘I’m going to do this,’” George said. “‘I’m going to be a firefighter. I’m going to protect this county,’ and we need that.”

Jason Wharam, chief of the Dillwyn VFD, said the Stish family presented the check during the dinner event.

“It was actually in a Christmas card with the check in it,” Wharam said.

Wharam said due to the donation, the department has been able to make payments and an order on a new fire engine.

Wharam said that three other departments in Buckingham County — including Toga, Glenmore and Arvonia — received donations from the event. The three departments will receive $2,700 each.

Steve Toney, chief of the Arvonia Volunteer Fire Department, said the donations will go to payments toward a truck that will act as both a crash truck and brush truck, which can go off of the roads in the event of field or outdoor fires.

He said the department enjoyed taking part in Thor’s Hammer and that the department won two awards through firefighters and their families who made chili for the cook-off.

“They put a lot of time in it,” Toney said of the Stish family’s work in organizing the event.

Mark Lilly, assistant chief with the Glenmore Volunteer Fire Department, said the donation will be used toward new turnout gear, foam tanks, which he said will put out fires faster, batteries for thermal energy cameras and funds to test air packs, used by firefighters to breathe in areas with heavy smoke and fire.

Lilly commented on the dedication from Stish’s family, noting that George and Xander Stish, their son, are volunteers with the department.

Lilly said the Glenmore department has 18 active members and most work full-time jobs. He said members will keep their gear with them or in their vehicles at all times to prepare to head to emergency situations.

“Everything we get is a blessing,” Lilly said.

A 21-year-old Prospect man was arrested Thursday at approximately 6:05 p.m. in connection to a reported robbery at BB&T Bank,... read more