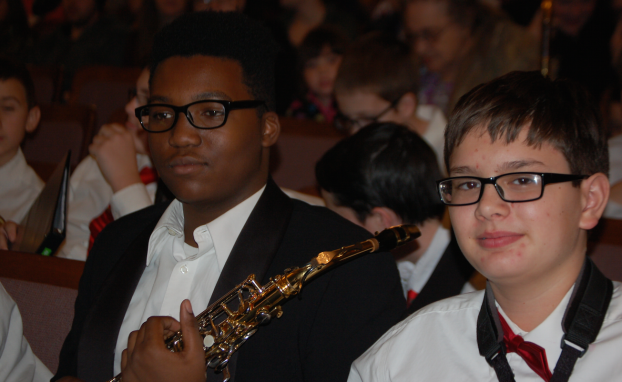 Students and families at Prince Edward County Public Schools (PECPS) enjoyed an assortment of winter-themed events Thursday where students from elementary through high school, and their families, got to take part in musical performances, refreshments and a raffle.

The middle and high school bands put together a winter concert at the high school auditorium.

A bake sale and silent auction took place in the hall outside of the auditorium to raise funds for the bands.

The Prince Edward High School Choir sang selections such as “Deck the Halls,” “We Wish You a Merry Christmas” and a song called “Snow Day,” by Jay Althouse. Band Director Tiarrah Crouch led the choir while playing an acoustic guitar.

Members of the Middle School Intermediate Band played selections of “Winter Wonderland” arranged by Michael Story, and energetic “Calypso Variations (on Tina Layo)” according to the concert flyer, while members of the Advanced Band played “Andalucia,” “Ancient Castle” and “All is Calm.”

The Prince Edward County High School Concert Band finished out the event with themes from “The Nutcracker,” “A Jammin’ Caribbean Christmas” and “Fanfare Prelude on ‘Joy to the World,’” according to the concert flyer.

“Our teachers and students are full of talent and it is great to see so many family and community members come out to support our children,” Johnson said.