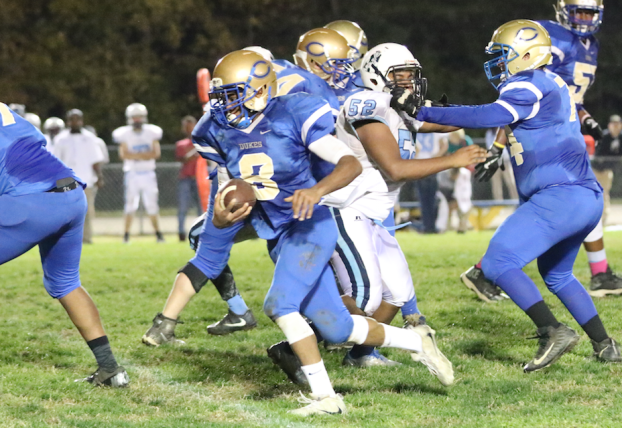 Cumberland County High School senior Darron Ridley made an impact for the Dukes both as a running back on offense and as a linebacker or strong safety on defense (photo by Titus Mohler).

In sports, but especially in life, it means a great deal to have someone that you can rely on. Cumberland County High School senior Darron Ridley has established himself as one of those people.

“I love Darron,” said Edgar Knapp, former Cumberland head varsity football coach. “For three years as I was the head coach there, Darron never missed a practice. No matter what you needed of Darron, Darron would do it. He’s not the biggest guy, he’s got a little bit of speed, but he gives you everything he has every single play, (will) play to exhaustion, just the kind of kid that you can always count on.”

Ridley has a personality that has helped him be a steady presence in other ways as well.

“I would say that I’m laid back and chill, but I’m a little funny too,” he said. “I just like to chill and let everything go with the flow.”

He said this disposition is particularly helpful in football, “because you have to keep a clear head when you play so you don’t over pursue and lose your attitude and stuff.”

Ridley moved to Cumberland from Charlotte Court House when he was in the second grade. He has been forming habits on the gridiron since he was 9, first playing in a recreational league in Cumberland.

He established himself on the Cumberland varsity team as a running back on offense and as a linebacker and strong safety on defense, but he filled another role in the early years of recreational ball.

“I actually started out as a center and a guard,” he said.

He played in the rec league through his freshman year of high school, and then moved on to varsity play.

“When I was old enough, they didn’t really have a JV team,” Ridley said. “… I’ve never played middle school or JV.”

Reflecting on his high school career, “over all the years, I feel like my performance got better,” he said. “I didn’t start out how I wanted to, but I ended how I wanted to.”

When it comes to college football recruitment, “I figured I would get looks and stuff, but I haven’t heard anything, so I honestly think I’m actually probably done with it,” he said. “So now I’m focusing on track.”

An all-state runner, he started out with the 4×800-meter relay team, and now his main event is the 300-meter hurdles.

On the academic side of things, he said he is aiming to go to Radford University because it has a good physical therapy program.

When he has free time away from his athletic and academic endeavors, “I’ll go to my grandparents’ house, and I’ll help out with my grandparents, or I’ll just chill with friends.”

Asked to describe himself in three words, Ridley thought about it and later said, “Truthful, blunt and funny.”

Coming on the heels of one of the best seasons in Longwood University women’s soccer history, Big South Conference (BSC)... read more