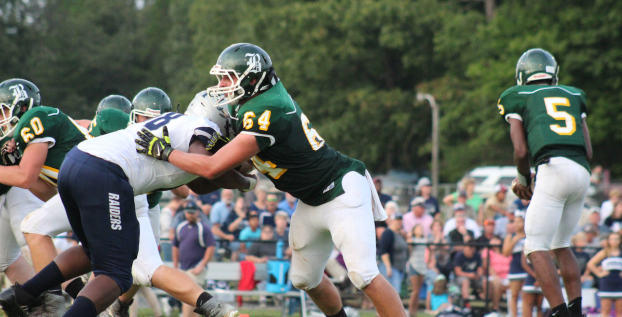 Buckingham Head Coach Josh Wallace was pleased with the representation.

“It was hard for us because, really, we’re kind of the odd team out in the region,” he said. “We’re the only team from the James River District in that region, so that makes it a little tough…”

The only teams in the region that the Knights had faced were Appomattox County High School and Chatham High School.

“So, it was pretty good to get those three guys,” Wallace said.

Despite finishing the regular season strong, Buckingham was not able to qualify for the regional playoffs. The Knights started the 2017 season 1-5 but closed out the year with a four-game winning streak to finish at 5-5.

Key to that change in momentum was an offensive adjustment that led to an emphasis on the run game. Newby played an important role in helping Buckingham’s ball carriers to find running room.

Newby also made the all-district first team as an offensive lineman.

Though many of the regional coaches were unfamiliar with Newby, Wallace said that helping Newby make the all-region first team were his all-district accolade, regional respect for Buckingham’s program and Wallace’s speech on Newby’s behalf.

“It wasn’t really what I had to say, personally, but it just (was) more or less respect (for) the program,” Wallace said.

Moseley and Leake did have individual stats that helped them receive recognition.

Stepping into the limelight

Desmond Vaughan is only 12 years old, but his opportunities to take big stages in the realm of athletics have... read more