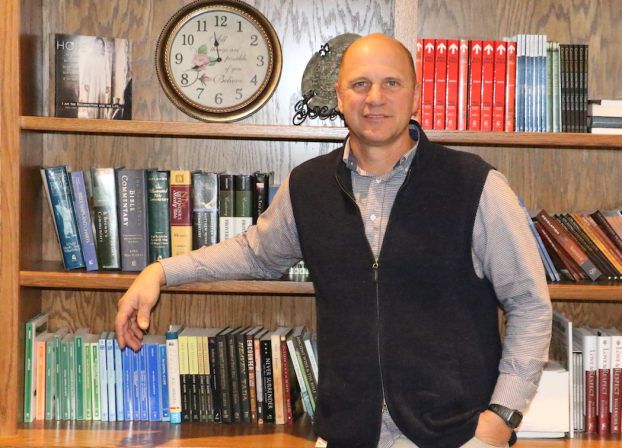 Pastor Marvin Fisher stands in his office at Calvary Chapel Farmville. He has been pastor of the church since it started Jan. 3, 2010 (photo by Titus Mohler).

Fisher: a follower of Jesus

Marv Fisher has been part of the Farmville community since 1995, and he has been pastor of Calvary Chapel Farmville since 2010.

But for awhile, he did not want to fill the role of pastor.

He noted that what God confirmed in his heart is the message that “I will bring people to wear the different hats. You just need to do what I’ve called you to do.”

Fisher gives credit to what he describes as an amazing team of people that have come around to help him lead Calvary Chapel, including assistant pastors, deacons and elders.

He served as a preaching elder at a church in Buckingham County for six years before helping start Calvary Chapel Farmville.

“We started this in the gymnasium here in Farmville on Jan. 3, 2010,” he said, noting the church moved out on U.S. Route 460 for a few years before coming to its present location at 302 Industrial Park Road in May 2013.

“We started with (16) people,” he said, and now the church averages about 180 people each Sunday.

While he works full-time as the pastor, he still has a part-time day job.

“I started a drywall business here in 1995 in this area,” he said, referring to Bent Creek Drywall, out of Prospect. “My sons now do all the work in the drywall business, but I still do two half-days a week.”

The business services Amelia, Cumberland, parts of Powhatan, Buckingham, Lynchburg and Keysville, trying to keep its projects within an hour of Farmville.

Fisher started the business upon moving to the area in 1995 from Lancaster County, Pennsylvania, which is where he grew up.

For the first 14 years of his live, he and his family were part of a conservative Mennonite church before transitioning to a church similar to Calvary Chapel.

Fisher describes the secret to happiness as daily finding “a quiet heart, a quiet place and quiet time with the Lord — that’s it.”

“In summary, to me, it’s walking with Jesus,” he said. “That’s so general for a lot of people. In your walk with Jesus — personal, it needs to be personal.”

“They can all get you in trouble sometimes,” he said with a chuckle.

Of the best decision he has ever made, he had three.

In third, he said the best decision he has ever made is to be a pastor.

“I love to prepare and to teach and to bring people together,” he said. “I love camaraderie. I was always a coach. I coached little league. I love seeing people come together and pull together … and that’s kind of how I lead this team here too.”

Last year, the children’s ministry set up a Christmas tree as you entered the church. Next to the tree, they... read more