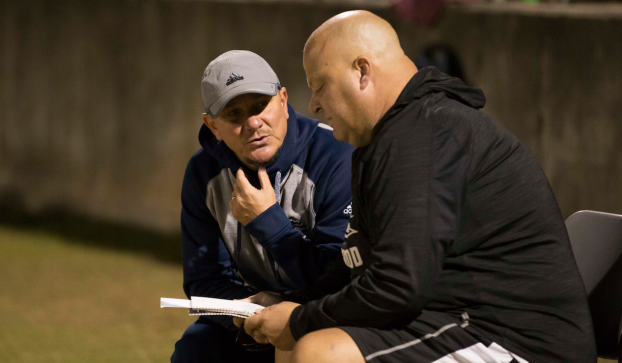 Coming on the heels of one of the best seasons in Longwood University women’s soccer history, Big South Conference (BSC) Coach of the Year Todd Dyer was named the Virginia Sports Information Directors Association (VaSID) 2017 Women’s Soccer Coach of the Year, the organization announced Tuesday.

Dyer confirmed it was his first such honor earned while leading a team at the Division I level.

“First and foremost, it means our program had a pretty good season,” he said. “Just to be thought of in that light, it means we did something right throughout the course of the season. I think it’s just a reflection of the success we had as a group this year more than anything.”

Joining Dyer on the VaSID list were five all-state Lancers, including first-team selections in senior goalkeeper Maria Kirby and junior defender Sydney Wallace and second-team selections in sophomore forward Emilie Kupsov, senior midfielder Janese Quick and freshman defender Carrie Reaver. The five VaSID all-state selections are the most Longwood has received in a single season since Dyer founded the program in 1994.

These awards add to a breakthrough season for the Lancers, who advanced to the Big South Championship game for the first time in program history, finished 13-5-3 on the year and strung together a 10-game unbeaten streak that was the longest in the program’s Division I era. Spearheaded by the Big South’s stingiest defense, the Lancers shut out 11 of their 21 opponents and set or tied program Division I records for wins (13), winning percentage (.690), shutouts (11), goals against average (0.55), fewest goals allowed (12), save percentage (.885), shots (344) and shots on goal (170).

“We try to do it like this every year,” Dyer said. “We didn’t do anything drastically different. I would say the biggest thing is that we didn’t have any really big personalities or characters on the team, so it was a very cohesive kind of unified, collective effort, and I think that personality-wise, as a team, I think that was the biggest thing.”

He said that everyone simply pulled together.

“We didn’t have to lean on one person to kind of bail us out or go win the game. We just kind of shared that responsibility throughout the year.”

“We were fortunate enough to get some positive results in tight games, and you just start to build on that,” Dyer said. “Obviously, Sydney Wallace and Carrie Reaver, our two central defenders, they had great years, along with Kirby and our entire back line. And if you can defend, you’re going to be in every single game, and you just have to find those goals when the opportunities arise, and we were able to do that, and we got on a nice little streak there towards the end where we went unbeaten in 10 straight.”

Dyer and Associate Head Coach Rich Stoneman engineered the breakthrough 2017 season, leading Longwood to a third-place finish in the regular season and back-to-back shutout wins in the quarterfinals and semifinals of the Big South Championship. The No. 3 Lancers topped No. 6 Charleston Southern University 3-0 in the quarterfinals, upset No. 2 Liberty University 2-0 in the semifinals and fell 1-0 to No. 1 High Point University in the final.

Of all of Longwood’s achievements this past season, “I think the biggest thing is we took one step further this year — we made it all the way to the final,” Dyer said. “We played well in that game. We just didn’t get the goal that we needed. We’d even talked about it last year where we got a small taste of it making it to the semifinals, so our goal this year was to take it further, and we were able to do that by reaching the final, but we weren’t satisfied. We want to win that thing, and we know how to lose it at this point, and hopefully that gets us one step closer to winning it sooner than later.”

Of Longwood’s all-state selections, Kupsov, Reaver and Wallace will return next season. They make up part of a core of eight returning starters and 22 returning letterwinners to next year’s squad.