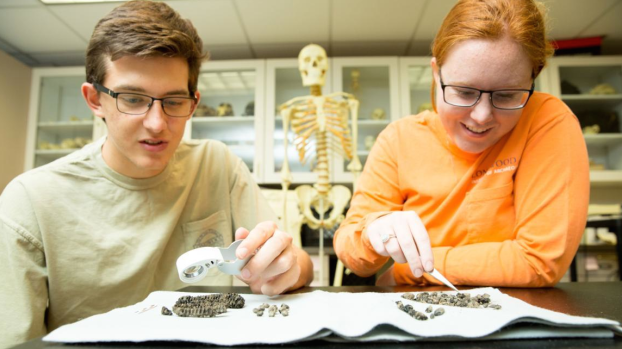 As Longwood students Olivia Mehalko and Cameron Reuss knelt in the dirt and carefully unearthed the remains of a 1,000-year-old Native American hearth, they came across what would seem to be a common find.

But in the two decades Longwood archaeology students have been excavating the site, no one had ever found anything quite like this: the charred remains of eaten corncobs.

If it seems commonplace, that’s because it is. But the find unlocks a larger story about the Sapony tribe that once lived in what is now Charlotte County.

Winning this award and getting published is both significant and exciting for Olivia and Cameron.

“Winning this award and getting published is both significant and exciting for Olivia and Cameron,” said Bates. “As was the discovery of the corncobs as the first bona fide direct evidence of corn. We had long suspected that the Sapony tribe operated as a chiefdom — a permanent settlement with multiple layers of administration — as opposed to the nomadic stereotype we often think of with Native American tribes.”

The corncob discovery during Longwood’s Dr. James W. Jordan Archaeology Field School was the first direct evidence of the cultivation of corn at the Late Woodland Indian village excavation site in Charlotte County — which has served as an outdoor laboratory for Longwood students for two decades.

Finding the corncob prompted Mehalko, a junior from Quinton, and Reuss, a sophomore from Virginia Beach, to research the role of corn in the southern piedmont of Virginia and the significance of its cultivation for early populations along the Dan River.

Longwood affords students unique possibilities for undergraduate research — opportunities not typically available at larger institutions. Students work directly with faculty in conducting hands-on research and, in many instances, take the lead on a portion of the project.

Bates remembers having similar significant opportunities for research when he was an undergraduate student at Longwood.

“We have a long tradition in our program of engaging students in professional societies and meetings, and producing the caliber of research that gets published,” he said. “We are a small program and a small school, and no undergraduate at a larger institution is going to have these opportunities.”

Since 1998, Longwood students have been unearthing artifacts at the Randy K. Wade dig site at the Stanton River Battlefield State Park in Charlotte County. The site has yielded information on what daily life was like in a Sapony Indian village along the banks of the Staunton River from 940 A.D.to 1455 A.D.

During this summer’s Archaeology Field School experience students unearthed an intact hearth that contained the charred corncobs. The hearth also contained the remains of other organic materials such as charred bark, sticks, bone fragments and acorns.

“They ate the corn then threw the cob in the fire,” Bates said. “It’s not all that different from what we do today when there are people sitting around a camp fire.”

Bates noted that previously corncob impressions had been found on pottery at the same site. He said the first direct evidence of corn cultivation in the Late Woodland American Indian village provided further evidence that the people who lived there 1,000 years ago were organized in a chiefdom, which is dependent on a domesticated food supply and the ability to feed a larger population.

“All of the signs have been pointing to a chiefdom as the system of order, and the corn is just part of that story,” Bates said.

A timeless story and a unique art form will converge Dec. 7, 8 and 9 to entertain members of the... read more