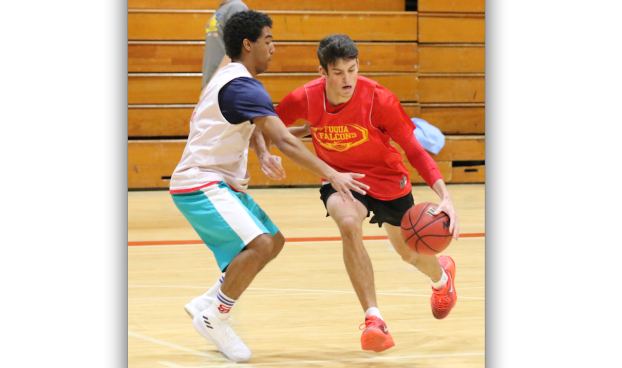 Few basketball teams in the Heart of Virginia enjoyed as dominant a start to the 2017- 18 season as Fuqua School’s varsity boys basketball squad.

The Falcons (6-1) opened the year with a six-game win streak during which they won by an average of 33 points and averaged 66.8 points per game on offense.

Fuqua Head Coach Charles Thomas said he knew his team was capable of it, “but I didn’t think we would get out of the gate quite that fast because of football ending late. With the football team playing in the state championship, we had, I think, seven or eight guys that came over from football once that ended. I knew we had the potential to be decent, but I thought it would take a little bit longer. I thought it would be a little bit slower.”

He credits the fast start with work put in over the summer.

In their last game of 2017, the Falcons faced a higher level of competition in the form of host Steward School, which defeated Fuqua 64-34.

He noted the Spartans had two impressive guards and a highly skilled 6-foot-11- inch inside player, who was more than the Falcons could handle.

Thomas said that his team’s tallest player this year is probably senior Kevin Dunn, who he estimated as being as tall as 6 feet 3 inches.

“We just don’t have any height this year,” Thomas said.

He noted that the Falcons can work around that.

“Our game plan against Steward was to kind of pack it in on the 6-11 kid and double team him,” the coach said. “Our concentration was on him, and then the two guards started making threes, so then we had to get out on the threes, and then they just started pounding it inside, because (it) left us one-on-one inside with a 6-3 guy on a 6-11 guy. So, they had us on a yo-yo, but they shot the ball extremely well that night, and I think it just changed the game, and it opened up some things for them for sure.”

Senior point guard Tyler Thomas led the Falcons in scoring despite facing a defense focused on stopping him.

“They ran a box-and-one defense on him, so he was held to 11 points, which is about half of his average,” Coach Thomas said.

Tyler Thomas, who has verbally committed to play for Guilford College next year, will be key to Fuqua’s efforts this season.

“He’s been playing the point for us for the last three years, so definitely got to have leadership out of your point guard,” Coach Thomas said. “That’s really important, I think, with any team.”

But the coach expects him to be one of many leaders as the 2017-18 Falcons feature a total of eight seniors. They include guard Clay Osborn, center Kevin Dunn, guard Jalen Patteson, guard Billy French, forward Eli Hall, forward Cody Howard, forward Ethan Watson and Tyler Thomas.

“I don’t know that we look to any one person,” Coach Thomas said. “I just think as a group, collectively, we like all of our seniors to lead by example in what they do every day in practice, and not only what they do in practice or what they do on the court but just what they do around school and academically — all that stuff is so important for our program as a whole.”

The coach said that because his seniors are the ones who have experience in the program, they are the ones who need to help train the younger players on the roster, a list that also includes one junior, four sophomores and a freshman.

Coach Thomas expressed excitement about having some young players who have demonstrated a love for the game, adding that “if they continue to work hard and stay humble, I think they could be good players in our program for the next couple years.”

He noted the Fuqua junior varsity team was strong last year, and several of its players have been called up to varsity this season, including Matt Osborn, sophomore guard Drew Osborn and freshman guard Maureon Tisdale-Couch.

Of Tisdale-Couch, Coach Thomas said, “He plays a lot of (Amateur Athletic Union ball), plays a lot of basketball in the summer, and I think he has the potential to be a really good player for us. So, we’re kind of bringing him up this year and trying to get him as much experience as we can, because we know Tyler’s leaving, and we’ve got to have a guy to step right in there next year and be ready to go.”

The Falcons are without four key players from that successful squad. Graduating earlier this year were center Julian Gee, forward Ed Newman and center/ forward Hank Dai, while forward Hunter Gilliam, now a senior, opted not to play this year, focusing on baseball.

Despite these losses, Fuqua has shown it can play well and win in both lopsided and tight games this season.

Coming on the heels of one of the best seasons in Longwood University women’s soccer history, Big South Conference (BSC)... read more