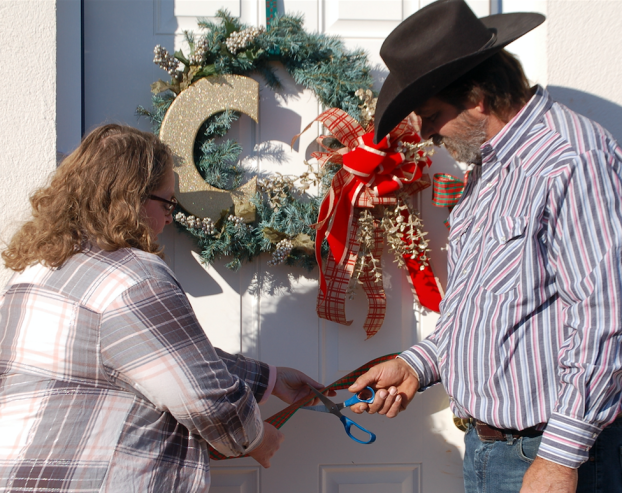 Leigh and Chris Clarke prepare to cut a ribbon for their new home Saturday in Dillwyn. (Photo by Emily Hollingsworth)

A home for Christmas

Members of a Dillwyn family said a house dedication held for them Saturday was not welcoming them to a house, but to a home.

Jayne Johnson, Farmville Area Habitat for Humanity executive director, said the time was a celebration of the work that Chris and Leigh Clarke, their family and volunteers in the community had put into building this home.

“It’s a wonderful time for Chris and Leigh after a long, long time of working on this home,” Johnson said. “We’ve finally arrived.”

Buckingham County Partner Donna McRae-Jones led members attending the dedication in a prayer and expressed gratitude to volunteers and members of the family for building what’s now Leigh, Chris and their family’s home.

“The work that they’ve done through hand to hand and heart to heart,” McRae-Jones prayed, “they worked from their heart, dear Father.”

During the dedication, Vincent Ross, a Liberty University graduate student spoke. Ross and his grandmother, Mary Etta Ross, form one of the first families in Buckingham County to work with Farmville Area Habitat for Humanity in building a home.

“I know Habitat has really changed our lives,” Ross said, describing the home they had lived in before their new Habitat home. “With my grandmother, we stayed in a home, we didn’t have running water.”

To the Clarkes and their family, Ross said, “It’s going to be a change to everybody’s lives, and as this family moves into this home, they’ll continue to bless others as well.”

Leigh Clarke, who spoke with Chris Clarke, her husband, and their children, said she and her family are grateful for the project.

“This has been a big blessing from God,” Leigh said about the Habitat home. “We’ve been praying for a long time to have a home. Not just a house, but a home, and Habitat has allowed us to be able to do that.”

She described the process of building the house as an experience where a lot of love was put into the project.

“The people that we got to know and the friendships that we’ve made, I know that it’s all worth it, and God’s time is always the right time, even if we don’t understand it,” she said.

In the spirit of giving, Clarke and her family gave Christmas gifts to Habitat representatives and volunteers.

Samantha Poole, Leigh’s daughter, said she is also glad for a place to call home. She described looking at area mobile homes and envisioning where the family’s furniture and rooms would go.

“That’s where our room would be, and that’s where we would put the couch,” Poole said. “There’s no need for us to look around anymore, because we have a home now.”

Chris Clarke also expressed gratitude to participants during the event.

“I want to thank everybody at Habitat, everybody that’s come together to help us get where we’re at,” Chris said. “We couldn’t have done it without everyone.”

Chris and Leigh also thanked the members of Salem United Methodist Church, in Dillwyn, for their support.

Brenda Swan, whose husband, Billy Swan, is the pastor of Salem United Methodist Church, said she was glad for the dedication. Chris and Leigh Clarke are members of the church.

“They are a wonderful family,” Swan said.

Following a prayer and ribbon cutting, participants were invited to look inside of the home and have refreshments.

Leigh had taken photographs of the house while it was in development and placed them on the walls for people to view.