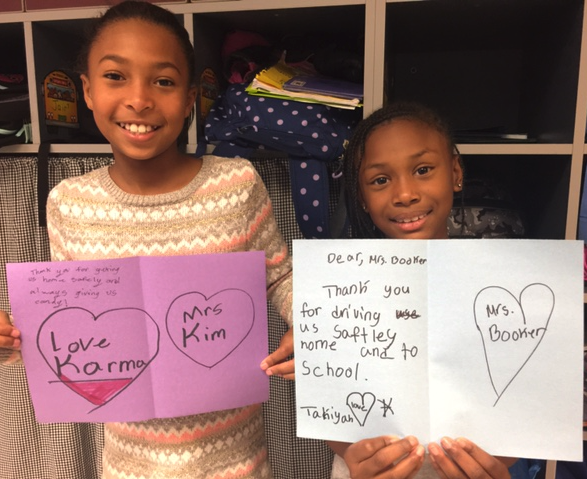 “They are the first to see our children every day, and then they’re the last to see them as well,” Gills said. “So we think their job is just so important to build this relationship to make the kids want to come to school.”

To thank employees at the division’s transportation department, students and administration created a series of ways to thank bus drivers during School Transportation Employee Appreciation Day, Oct. 17, and throughout that week.

Ways that students and staff thanked bus drivers included making cards, hosting a breakfast for the drivers and even packing roughly 40 goodie bags that included sweets, healthy foods and bottles of water, Gills said. Leftover bags were given to bus drivers from another school division during a sports game that evening in Cumberland, Gills said.

“We put a little stop sign on the treat bags and it says, ‘We ‘wheelie’ wanted to stop and say thanks,’” Gills said, noting a play on words with the term “wheelie.”

Gills noted a dedicated group of bus drivers within the division who often transport students from kindergarten through 12th grade within the same bus.

She noted last year that she had shadowed a student and rode the bus with the student to school. Gills said the bus driver will post drawings students have given her on the inside of the bus and has read picture books to younger students during periods of down time as older students were leaving the bus.

“It’s things like that that are so special, so we just wanted to make sure we stopped and were able to say thank you to the drivers,” Gill said.