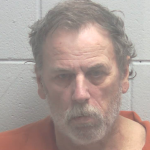 A 59-year-old Rice man plead guilty to aggravated sexual battery with a victim 13 years old or younger, production of child pornography and indecent liberties by a custodian Thursday in Prince Edward County Circuit Court. According to online court documents, a presentence report was ordered for Parker Lamar Orfield for March 12. According to a previous press release, Orfield was being held at Piedmont Regional Jail without bond.

“The investigation began after a complaint was filed with the sheriff’s office on April 6 in reference to the sexual assault of a 7-year-old female,” police said in the release.