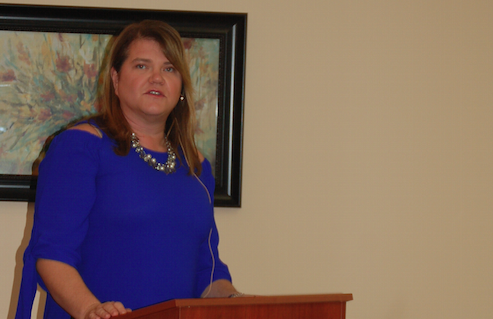 A training center headed by the General Services Administration (GSA) and the Department of State (DOS) in the Town of Blackstone is set to be completed in 2019, Project Manager Abby Low discussed during Monday’s Farmville Area Chamber of Commerce meeting.

The site of the more than $400 million Foreign Affairs Security Training Center (FASTC) will be located approximately 45 minutes from the Town of Farmville within the area of Fort Pickett, Low said.

The center will consolidate 11 different contracted training sites around the U.S. focusing on hard skills into one facility, Low said, a decision recommended by the DOS to prepare foreign affairs personnel for increasingly uncertain and perilous conditions overseas.

Low said the members of the bureau protect information, people and property of 275 U.S. embassies and consulates worldwide.

“Think about doing that training in 11 different places sort of all over and the inefficiencies in doing that. What the State Department is doing is co-locating all that training for efficiency,” Low said.

She said the training programs would be flexible and adapt to recent events. Low cited changes in how the departments train and secures personnel since the 2012 attack in Benghazi.

Low said the project initially began in 2009, and following a “long, twisted tortured history,” due to challenges toward funding and approval, the facility was awarded a design contract in November 2014 and awarded the first construction contract close to a year later in 2015.

Low said the project is at an estimated 50 percent completion, with the full project set to be completed in 2019.

Members of the Chamber of Commerce viewed videos of the facilities, including an explosive demonstration area, an indoor tactical maze, classrooms and a mock design meant to represent an urban area overseas that may be a site of attack.

Also attending was Chuck Raiderstorf, retired U.S. Marine Corps officer who has worked in project management and advising for public and private sectors.

Farmville Town Council unanimously voted at the Nov. 8 meeting for a conditional use permit that will allow Eric Arthur... read more