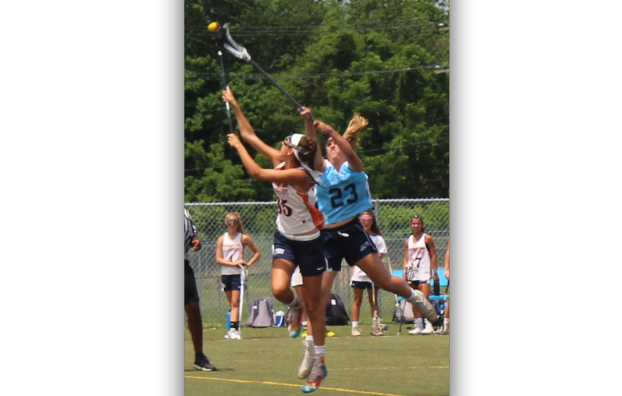 Junior Harper Melton, of Fuqua School, will play lacrosse in Farmville at the college level as a member of Longwood University’s Division I program (photo by John Melton).

Fuqua School junior Harper Melton was interested in playing lacrosse at the college level, and it turns out that everything she wanted and needed in that regard was in her backyard. The standout junior midfielder verbally committed last week to play for Longwood University, which had been showing interest in her since her sophomore year.

Melton was pleased to be able to draw the interest of an NCAA Division I program and then be able to commit to it.

“It makes me feel like I have accomplished a lot from playing since kindergarten,” she said. “All the practice and stuff has paid off, and now I’m going somewhere where I can learn more and become a better player.”

She noted that her desire to play college lacrosse came about probably when she was in seventh or eighth grade.

When she began to consider schools, there were others in the running, including Furman University, Mercer University and Virginia Commonwealth University.

“Longwood just best suits me,” she said. In explaining why, she noted, “The coaching staff was great, the players were great, and I really want to major in education, and Longwood is a school for education.”

Melton said that while she weighed her college options, Lancer coaches “were very good at seeing, hearing both sides and giving you time,” she said. “They were very calm about that, which is nice.”

Noting who helped her reach the successful conclusion of the recruitment process, she said, “I would like to thank my parents, my coaches and my family and friends just for supporting me through it, because it’s a hard process.”

Her mother, Leigh Melton, said that all of Harper’s “hard work over many years — probably about 12 years — of both academics and athletics, kind of brought her to this point. And I have to say, the whole process, it was long, it was a roller coaster at times. It really made her more of an adult. She had to talk to coaches probably two, three times a week, and I think she learned a lot, grew a lot, and we’re just proud that she got a few offers and was able to pick a school that kind of best fit her needs and gave her everything she wanted.”

Former Longwood field hockey great Nancy Fowlkes, who played for the blue and white from 1971-74, was set to be... read more