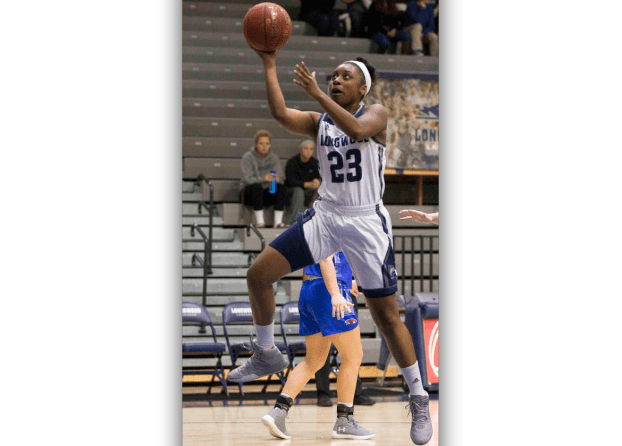 Longwood University senior guard Autumn Childress looks to get two of her game-high 19 points Saturday during the Lancers’ 84-82 victory over visiting UMass Lowell. (Photo by Mike Kropf of Longwood Athletics.)

Paced by a dominant 19-point, 15-rebound performance from senior guard Autumn Childress that led a barrage of five Lancers in double figures, Longwood University’s women’s basketball team picked up its first win of the season Saturday. In their 2017-18 home opener, the Lancers edged out University of Massachusetts Lowell 84-82

Childress had 13 of her 19 points in the second half to lead the charge for a Longwood squad that opened a 19-point advantage with less than a minute to play in the first half.

“I’ll take a win anytime I can get one,” said Longwood Head Coach Bill Reinson. “We played really well in the first 20 minutes. Our press was effective and we were attacking the basket. We struggled at the rim, but we followed the game plan.”

Childress, the 5-foot-10-inch guard from Midlothian, finished the afternoon 6-of-14 from the field. With her game-high 15 boards, it was her second straight double-double following Nov. 14’s 16-point, 10-rebound performance against North Carolina Central University.

“Autumn played very well again today,” Reinson said. “She’s playing the way a senior leader should play, and we’ll continue to need that effort from her.”

“Stephanie Guihon was impressive today,” Reinson said. “She has played extremely well for a freshman. Mallory Odell had some bright moments, as well. Getting her back to full health will definitely be a boost for us.”

Guihon, a Largo, Maryland, product, scored 10 of her 17 points in the second half and finished 7-of-14 from the floor.

The Lancers ultimately had to hold off a furious River Hawk second-half rally that eventually tied the game at 75 with three minutes, 20 seconds to play. A layup from Spradlin and three free throws from Childress gave Longwood a quick 5-0 run to take an 80-75 lead with 40.6 seconds remaining.

The River Hawks fired off a three-pointer with one second on the clock, but it clanked off the back of the iron.

Longwood is in the midst of an eight-day hiatus between games but will look to collect its second straight win Sunday at noon when it hosts Fairleigh Dickinson University.