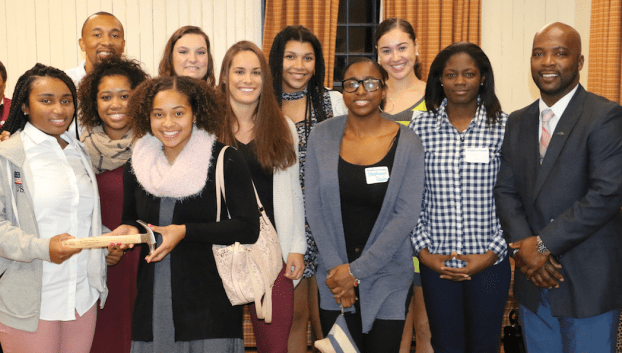 Farmville Area Habitat for Humanity (FAHFH) celebrated past and present success stories as well as future aspirations during its 2017 Golden Hammer Awards on Sunday at the Historic Farmville Train Station.

A crowd of donors, volunteers, advocates, board members, committee members and concerned citizens were in attendance as FAHFH issued accolades to those who made the homeownership process possible for more families in 2017.

“I thought it went really well — great turnout and just a lot of excitement and encouragement,” said FAHFH Community Outreach Director Sam Rabon. “I always love hearing the partner families telling their stories. That’s always a highlight of the evening.”

One of those partner families included John and Teonna Robertson, of Prince Edward. They have seven children from ages 1-9 and were described by Rabon as the hardest-working family in Habitat.

They are in the early stages of the homeownership process. Farmville Area Habitat for Humanity has partnered with Prince Edward County Public Schools and Fuqua School to build a home in Prince Edward that the Robertsons are slated to move into. Because the mascots for Prince Edward and Fuqua are both birds, an eagle and falcon, respectively, the project had been called the Birdhouse Build.

During the homeowner panel Sunday, the Robertsons gave details on the process so far, including describing their reaction when they received the news that they would be able to move into the house.

Teonna noted that they were driving down the road, and when she got the text relaying the good news, “I literally screamed, like I screamed to the top of my lungs.”

She replied with a euphoric text.

“I still have the text,” Rabon said. “It literally said, ‘I’m praising Jesus in my boots right now.’”

The panel also included the Boyd-Wilmouth family, of Charlotte Court House. Rabon said Jermaine Boyd, Angel Wilmouth and their children are FAHFH’s most recent partner family to be in its home and have it dedicated.

“Charlotte County was our most recent county that we started doing service in, and our main program out there has been our Brush With Kindness repair program,” Rabon explained to the crowd. “But we had the opportunity this past year to gain possession of a home that had been sitting vacant for a few years in Charlotte Court House. And we did what we call a rehab, a rehabilitation on that property.”

He noted Farmville Area Habitat for Humanity now has five new partner families it will be working with in the new year — two in Prince Edward County, two in Buckingham County and one in Cumberland County.

There were a variety of 2017 Golden Hammer recipients Sunday evening.

Those receiving the Golden Hammer Volunteer award included Brenda Taylor and Tina Sickmiller, for their work at the ReStore, Donna Bennett, for her administration work, Nehemiah Braxton, for his construction work, and both Alpha Phi Omega Fraternity Inc. and Longwood University’s women’s basketball team, for their all-around volunteer work.

Special Recognition awards were handed out to Yashua Berry, Ronnie and Carol Baber and Ralph Dunnavant.

Members of the community gathered at the Veterans of Foreign Wars (VFW) Post 7059 on Graham Road to hear little-known... read more